Click here for the play-by-play and Box Score during the game.

The Cleveland Cavaliers clung on to their second win in a row against the Golden State Warriors to go up 2-1 in the 2015 NBA Finals. LeBron James played like LeBron James, but Matthew Dellavedova was the star of the game with his impressive numbers and his ability to give not just his teammates pumped up, but the entire stadium and city of Cleveland.

Steph Curry was shut down by Dellavedova initially, but gave the Cavs a run in the fourth quarter by nailing 17 points, most of them from behind the 3-point line.

LeBron finished the game with 40 points, 12 rebounds and 8 assists over Curry’s 27 points, 6 rebounds and 6 assists. LeBron’s total points for the first three games of the series are the highest in history at 123 points.

The Cavaliers Made 9 of Their Last Free Throws

Lebron closed out the game with two free throws to make the Cavs 9-0 for their last nine free throws.

Golden State Almost Got a Possession With a Bad Call

Klay Thompson and Dellavedova were fighting over the ball on the out of bounds line. Originally Golden State got the call, but after review the refs realized Thompson was out of bounds and Cleveland got possession with 20 seconds left in the game and a 3 point difference in the score. 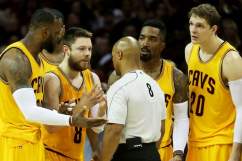 Once down 20, the Warriors are right in it now, and this Steph Curry reverse layup pulled them even closer. WATCH: http://t.co/3xh2Y8HPl4

Curry was relentless as he buried shot after shot in the fourth. The Cavs were unable to keep the ball out of his hands and it wasn’t a coincidence that Golden State closed the 20 point gap to a one-point gap with 3 minutes left in the game.

Dellavedova Played the Best Game of His Life

Dellavedova could be considered the MVP of this game. He made a two-pointer after being fouled multiple times. He also makes all of his free throws. He ended the game with 20 points, 5 rebounds and 4 assists, a career high stat line for him.

For the last 2 games, Matthew Dellavedova has had the best plus-minus ratio. #NBAFinals pic.twitter.com/RNabicZ58z

Dellavedova and LeBron Nailed a Much Needed Alley-Oop

The Warriors Made an 18 Point Comeback With 5 Minutes Left

Curry scored 8 points after being set free from Dellavedova and T. Thompson cannot keep up with him. The gap is closing fast.

The Cavaliers went up 20 points after a run by James, Dellavedova and Smith.

Shumpert was put back in the game and immediately sinks one from behind the 3-point line. Watch the video above to see what took him out.

Steph Curry of the Warriors and LeBron James of the Cavs end up on the floor late in the 4th quarter. (Getty)

The Warriors are shooting 39.4% from the field and only 25% from deep, yet they still only trail by 3 midway through the second. Dellavedova is all over Curry and the MVP can’t seem to find the bottom of the net so he is just 1-6 with two minutes left in the half. He ended up with just 10 points in the first three quarters of the game.

Shumpert Was Taken Out with an Injury to His Left Shoulder

The Cleveland Cavaliers were forced to use a timeout after Iman Shumpert appeared to be in pain and gripping his left shoulder after a pick. J.R. Smith sunk a 13 footer to set the pace. while Igoudala and Lebron slammed down dunks. Surprisingly, it was Lebron’s first dunk of the series. 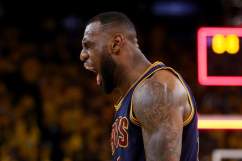 Stephen Curry celebrates in the first quarter against the Cleveland Cavaliers during Game Two of the 2015 NBA Finals.(Photo by Ezra Shaw/Getty Images)

The Warriors have the highest number of regular season wins at 67-15 and went 12-3 over the first three rounds of the playoffs to get here. However, if Curry continues to play like he did in Game 2, the Warriors are going to have a tough time beating Lebron James and the Cavs, even without Kyrie Irving and Kevin Love.

In Game 1, Curry was 50 percent from the field at 10-20 and scored 26 points with 4 rebounds and 8 assists to total an MVP-like game. In Game 2, Curry shot 21.7 percent from the field in Game 2, making only 5 of 23 shots. Fans were in shock when he missed shot after shot to total just 2-of-15 from 3-point range while being covered by Kyrie Irving’s replacement, Matthew Dellavedova. Game 2 was one of the worst-shooting performances demonstrated by Curry since he was drafted in 2006.

While Curry was missing three after three, Klay Thompson played his best game of the season, totaling 34 points which helped keep them in the game. Thompson and the rest of the Warriors were no match for Lebron James‘ triple double performance, the second in finals history after Jerry West in 1969.

To say Lebron James is by far the most dominant player on the court in this year’s NBA Finals is an understatement. In the first two games of the series, his average is 41.5 points, 12 rebounds and 8.5 assists while clocking an average of 48.1 minutes per game.

At this point, the game could go either way. If Curry can pull himself out of the Game 2 funk, the Warriors will be looking good, but there’s no saying what LeBron James could do tonight other than impressive things.