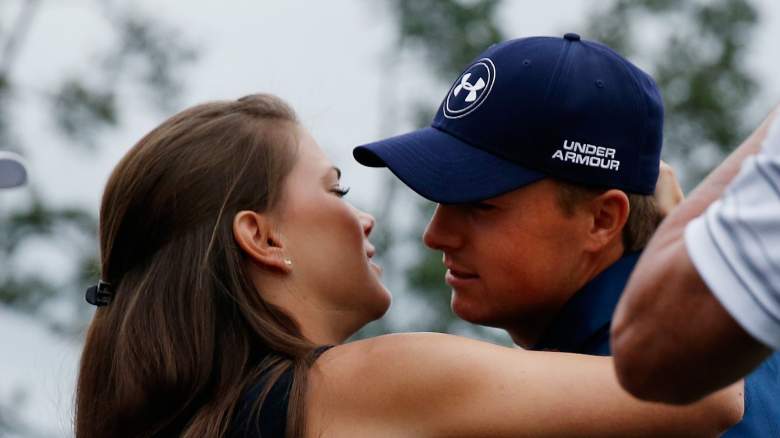 Editor’s note: Do you want to turn $20 into $1 million playing fantasy golf? Heavy’s partners at DraftKings have raised the stakes with the $3M Millionaire Maker contest for this week’s major in Britain, which begins Thursday, July 16. Sign up with DraftKings today for a chance to win big cash.

Annie Verret was the darling of CBS’ television coverage of the Masters as her longtime boyfriend Jordan Spieth went wire-to-wire for his first major tournament victory.

The cameras caught the congratulatory kiss and the celebration with the rest of the family that followed at Augusta National back in April. Their photos and story went viral.

Spieth was going for his second-straight major championship at the U.S. Open in Washington state on Sunday, June 21. He was a constant on the TV coverage by FOX throughout the week, especially Sunday. And when Dustin Johnson 3-putted on the final hole, the title was Spieth’s.

There to celebrate the emotional victory on Father’s Day were Spieth’s dad Shawn and mom Chris, along with a few other family members and friends. During the trophy presentation, FOX’s Joe Buck mentioned Jordan’s sister Ellie and brother Steven.

But Annie Verret was nowhere to be found — not by the cameras nor a mention in the post-round interview.

So, was Annie there? Well, we can’t say for sure whether she was or not. But if Verret was at Chambers Bay, she did one heck of an incognito job.

Though when Spieth embarks this week on the whirlwind media tour which comes with winning back-to-back majors, the question will almost certainly come up. Then we’ll know.

In about 3 weeks, Spieth will be traveling to Scotland, where he’ll try to win major No. 3 of 2015 when the British Open tees off at St. Andrews.