Amber Alvarez is the supposed girlfriend of DeAndre Jordan of the Los Angeles Clippers. Although, the two have not been connected since August 2014, there is a possibility they are just keeping their relationship under wraps. Alvarez and Jordan both posted some things on social media back in July 2013 and the couple was spotted at the premier of Teenage Mutant Ninja Turtles last summer in L.A., but they haven’t been seen together recently.

Watch the video above to see and interview with Alvarez featuring a few appearances by Jordan in the background.

Here’s what you need to know about Alvarez and her relationship with the basketball star:

1. Alvarez Started Modeling When She Was 16

Alvarez, a 5″9 Mexican-American bombshell, was spotted in a mall at the age of 16 by a modeling scout and has been pursuing her modeling career ever since. As she mentions in the video above, she aspires to eventually be on the cover or featured in the Sports Illustrated swimsuit addition.

She currently works for the Wilhelmina Inc. Modeling Agency and L.A. Models and has done various ads for companies such as John Frieda.

2. She is From Dallas, Texas

Alvarez was born and raised in Dallas, Texas, but moved to Los Angeles to pursue her modeling career in 2011 when she came on to the celebrity scene and met Jordan.

3. It Looks Like Jordan Will Remain in L.A. or Go to Her Hometown of Dallas to Play

DeAndre Jordan reportedly agreed to a four-year max deal with the Dallas Mavericks worth more than $80 million the first week of July.

Jordan will have a face-to-face meeting with the Mavericks before he makes his final decision, but the Clippers appear confident in making him complete the 180.

Neither Jordan nor the Clippers have technically done anything illegal, but as many have pointed out, they are breaking an unwritten rule. If Jordan does flip back to the Clippers, it’s a massive blow to the Mavericks, who lost Tyson Chandler to the Phoenix Suns, had much of their cap space tied up with Jordan and would now be stuck with an extremely thin free-agent market to fill the void.

If Alvarez and Jordan really are a couple, either decision he makes won’t put them into a long distance relationship really since she does modeling in both Dallas, her hometown, and Los Angeles. 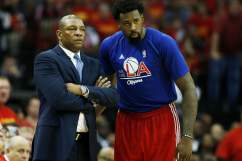 Did DeAndre Jordan Sign With the Mavericks or Clippers?

Despite what you would think from her sexual modeling pictures, Alvarez grew up in a religious family and continues to live her life following God’s word. If you look at her twitter feed and blog, much of it is made up of bible quotes and other inspirational quotes based on religion.

Her blog described her move to Los Angeles to pursue her modeling career:

I know this California Journey is going to be one tough path but I also know that it’s going to make me strong and independent. The feeling I have is a mix between bittersweet, scared, yet excited all at the same time. I know God is right beside me this whole way and guiding me into different obstacles to test my strength and faith in him. I know that I’ll have days where I’ll miss my family but I am so happy that they are also there by my side supporting me. This journey may be tough but I know with the help of God, family and friends, I’ll be able to persevere…

Romans 5:2-5 Peace & Joy
” …We rejoice in the hope of the glory of God. Not only so, but we also rejoice in our sufferings, because we know that suffering produces perseverance; perseverance, character; and character, hope. And hope does not disappoint us, because God has poured out his love into our hearts by the Holy Spirit, whom he has given us.” 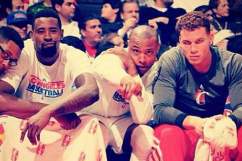 5. Their Birthdays Are 4 Days Apart, But Jordan is 3 Years Older

“@deandrejordan: "Aren't you something to admire…" Date night with @theamberalvarez pic.twitter.com/a4Dygsj5fc” My Handsome Man ❤️

Alvarez moved to Los Angeles on July 31, 2011, six days after her 19th birthday. DeAndre Jordan is 26 years old and his birthday is on July 21st, making his birthday four days earlier than her birthday on July 25th.