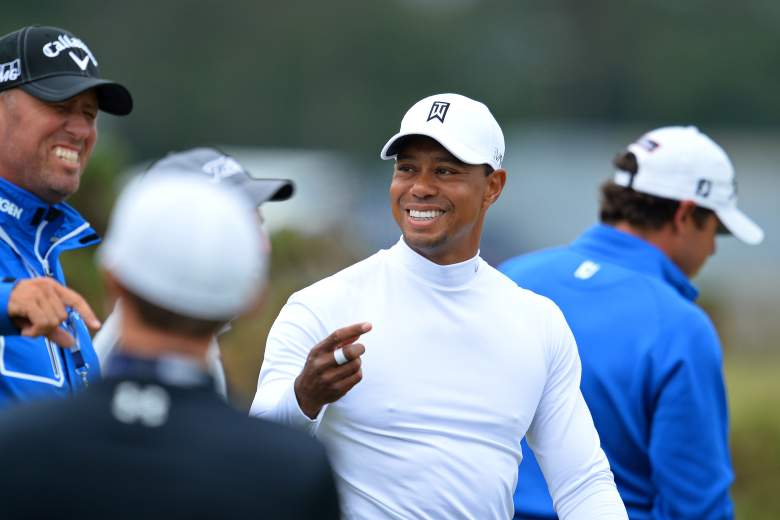 Can Tiger Woods get his game back on track this week? (Getty)

Want to turn $20 into $1 million by playing fantasy golf? Well now you can. Heavy’s partners at DraftKings are raising the stakes with the PGA $3M Millionaire Maker fantasy contest for golf’s third major of the season, which gets underway Thursday from the Old Course at St. Andrews in Scotland.

The contest gets started at 1:32 a.m. Eastern on Thursday, July 16, so lineups must be set by then. Don’t forget, the tournament is in the United Kingdom, so that’s the reason lineups need to be set so early.

The rules are simple: With a fixed salary cap of $50,000, choose 6 golfers you feel have the best chance to play well. The better your selected players do on the course, the better your fantasy team does, the more money you make. It’s that easy.

Considering this is a major tournament, the field is loaded with the best players in the world, minus No. 1-ranked Rory McIlory, who is out after rupturing a ligament in his ankle.

Only 5 golfers in the field have 5-figure salaries on DraftKings.

You can likely fit 2 if them into your lineup and be able to put together a competitive team with a few low-priced, but high-risk, bargains. Though your best bet is probably to go with one of them as an anchor and fill the other 5 with less expensive, yet lower risk, players.

St. Andrews hosted this event in 2010. That year Louis Oosthuisen of South Africa ran away with a 7-stroke win. Oosthuisen has the 6th-highest salary (minus Mclroy) at $9,900 and makes an excellent play.

One player I’m not ready to use is Tiger Woods. Is he rounding into form? Perhaps. Does he know this course? Definitely. Is $8,600 too steep of a price tag? Oh yeah it is.