Dustin Johnson may still be looking for major title victory, after a disappointing finish at the U.S. Open earlier this year, but the golfing standout has already clinched a victory on the romance circuit.

Johnson is engaged to Paulina Gretzky. Yup, that Gretzky. As in the daughter of the greatest hockey player to ever lace up skates. The pair have been through just about everything on and off the course but have found a way to make it work and, earlier this year, welcomed their first son into their jampacked sport-focused lives.

Neither Johnson nor Gretzky have been shy about updating the social media world about their relationship and the pair frequently make for one of the best looking couples on Instagram. Expect a few more photo ops while Johnson goes after a victory at this year’s British Open. Here’s what you need to know about Gretzky.

Her Father is ‘The Great One,’ Wane Gretzky

Paulina was born on December 19, 1988 just four months after her father, Wayne, was traded to the LA Kings in what is regularly regarded as one of the most important roster moves in NHL History.

Of course, Wayne’s career on ice is the stuff of sporting legend. Over the course of his career, which saw him play for everyone from the Edmonton Oilers to New York Rangers, Wayne won nine Hart trophies, four Stanley Cups and two Conn Smythe trophies. By the time he retired in 1999, Wayne held or shared 61 different league records.

In other words, Wayne was pretty good. He was also quite a family man. Paulina is the oldest of his and Janet Jones’ five children with three younger brothers and one younger sister.

She Has Worked as a Singer, Actress and Model

Gretzky boasts a fairly varied resume since jumping into the entertainment industry when she was just a teenager. She famously performed “I Will Remember You” during the 2003 Heritage Classic and her song “Collecting Dust” was featured on the soundtrack for MTV’s Laguna Beach.

She’s also worked to break into acting as well and has logged roles in Grown Ups 2 and Fame. However, it’s Gretzky’s budding modeling career that has garnered her the most headlines and Instagram likes.

Gretzky and her golf-playing fiance became first-time parents in January when she gave birth to the couple’s first child, a son named Tatum.

Following an emotional 2014 for the pair, which included a six-month leave of absence from golf for Johnson, Tatum’s birth was an anchor for the couple. Tatum, wearing some very boastful onesies, has joined Gretzky to cheer on his dad throughout the season this year and was there waiting for Johnson when he recorded his first victory of 2015 at the Cadillac Championship. Johnson told reporters afterwards:

You know, Paulina and Tatum were waiting for me when I got done. That was the best part of the day for sure. 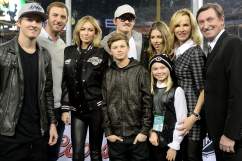 Read More
British Open 2015, Golf
The U.S. golf standout is set to join one of the world's most prominent sports families after proposing to Paulina Gretzky in 2013. Yes, that Gretzky.