Patrick Mouratoglou is one of the top tennis coaches in the world and his most famous client, undoubtedly, is Serena Williams. But is there something more to the relationship than simply player and coach?

Although neither one has ever confirmed that the two are actually in any kind of relationship, the rumors of romance have persisted for the past few years. Of course, there’s also never been any kind of denial from either Williams or Mouratoglou either.

Of course, there is some debate as to whether or not Williams and Mouratoglou are still on, particularly after the tennis player was spotted out with rapper Drake earlier this summer. TMZ was the first to report on the rumored relationship between Williams and Drake, posting photos of the pair looking very close in a Cincinnati restaurant. Check out more about that possible relationship here:

Williams has yet to officially comment on either of her rumored relationships with either potential boyfriend. Here’s what you need to know about her time with Mouratoglou and his reputation as one of the game’s top coaches: 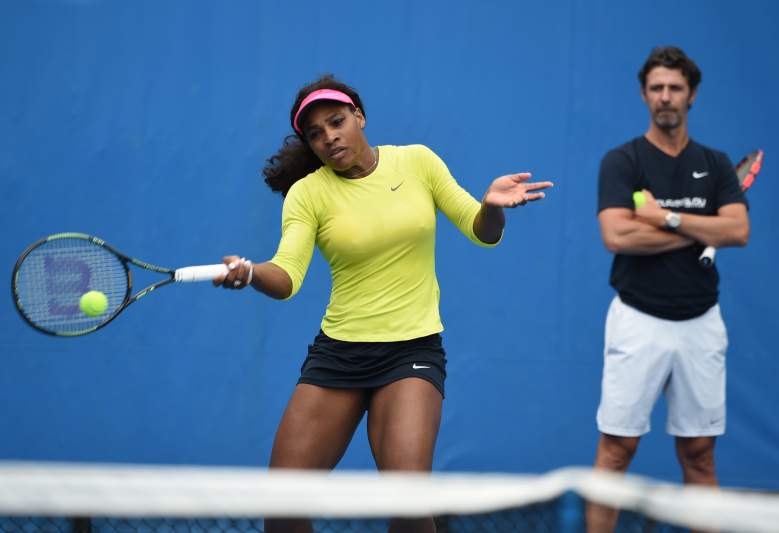 The French-native has been at the crux of Williams’ career rebirth, taking over as her coach just after she had suffered her first-ever opening round defeat in a Grand Slam tournament, falling in the first round of the French Open.

Since then, Williams has been all but unstoppable. Mouratoglou has guided Williams to a Wimbledon title, an Olympic gold medal, three US Open titles, two French Opens, an Australian Open and a return to No. 1 in the WTA rankings.

Prior to working with Williams, Mouratoglou boasts a decade and a half of coaching experience, working with everyone from Anastasia Pavlyuchenkova to Laura Robinson and even Grigor Dimitrov.

He Opened the Mouratoglou Tennis Academy in 1996

Mouratoglou got his tennis start when he opened his own coaching academy in Sophia-Antipolis, France, literally, on the beaches of the French Rivera. The Academy boasts 20 courts, 11 hard and nine clay, as well as a fitness and bodybuilding room and even its own on-site resort hotel.

The Academy offers a handful of training courses and even on-site living for perspective students with the chance to combine tennis work and academics. Students can even earn their high school diploma while staying at the Academy.

Mouratoglou announced the construction of the Mouratoglou Academy-Nice slated to open early next year, adding 34 more indoor and outdoor courts and will host both elite pros and juniors. He discussed the decision to expand his Academy with TennisNow:

I want to give the opportunity to more people to reach their goals in tennis whether they want to become pros, get a scholarship in an American university, or come for a week training just to improve their skills. At Mouratoglou Tennis Academy, there are professional players like Serena and Novak Djokovic, as well as juniors from all ages and all levels, as well as people who just want to improve. All together 130 players full time.

He Was Previously Married to Clarisse Mouratoglou

Mouratoglou sparked a bit of a serious off-court gossip when the rumors surrounding his relationship with Williams first began, particularly when he was still married.

According to The Daily Mail, Patrick and Clarisse, an interior designer, had been married when he first began coaching Williams and their ensuing divorce was caused, in part, to his relationship with his player. Clarisse had also worked with Moratoglou at his company PM Management Consulting. The pair had two children together, Charlotte and Juliette.

Williams’ long-time rival, Maria Sharapova had been the one to break the news about the relationship with Moratoglou after she made comments after Wimbledon 2013, saying, “If Serena wants to talk about something personal, she should talk about her relationship and her boyfriend who was married, who is getting a divorce and who has kids – and not draw attention to other things.”