American soccer fans will be missing a familiar face during this summer’s Gold Cup. Tim Howard will not be participating in the international tournament. According to USSoccer.com, Howard made an announcement last fall that he would be taking time off from the national team. Howard wants to spend more time with his family and believes the break will help him to do so.

This does not mean that Howard has ruled out continuing to play for the United States. In fact, from the sounds of things, Howard is expected back sometime in the fall. Head Coach Jurgen Klinsmann spoke with the US Soccer about the decision:

We had a very good and productive conversation. I totally understand Tim’s situation. He was very straight forward and honest in his approach, and I admire him for that. He has a wish to take a step back to take care of his family, and we came to the conclusion that it’s absolutely fine that he takes time off from international soccer until after [the] Gold Cup, and then we reevaluate. I told him as long as he is the same Tim Howard that we always see performing well, he will be welcome back with open arms and right back competing for a spot. He knows that he has to prove that he deserves to be back.”

According to MLSSoccer.com, Brad Guzan will be the starter for the US, unless a change is made. Guzan plays in the English Premier League for Aston Villa. He has stood in the shadow of Tim Howard for many years despite being quite a capable goalie in his own right.

It will be interesting to see how the US look with a new goalkeeper and if Guzan is able to capitalize on the opportunity. In the meantime, fans will continue to watch highlights of Tim Howard’s epic performance against Belgium in the United States’ last match of the 2014 World Cup.

NBC Sports reports that Tim Howard is expected to return in the fall and compete for a spot on the 2018 World Cup roster.

Tim Howard plays for Everton in the English Premier League. According to ESPN, he has two more seasons left on his contract and plans to retire from professional soccer after that. That would take him right up to the 2018 World Cup in Russia. Howard has consistently denied that he has a desire to return to the MLS as a player. However, he has not ruled out front-office work with the league.

He tweeted this out before the first Gold Cup match against Honduras, showing he is fully behind his guys:

Good luck to all my guys tonight! #KeepTheCup #USAvHON #USMNT 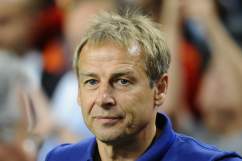 Jurgen Klinsmann & the MLS: 5 Fast Facts You Need to Know