If the beginning of the first preseason game was any indication, Amari Cooper and Latavius Murray will be focal points for the Oakland Raiders offense. Cooper touched the ball four times in just a few offensive series. He has three receptions for 22 yards. The Raiders also ran an end-around play where Cooper received the ball in the backfield.

Cooper had an impressive debut in limited action. It seems the young duo already have built a nice connection as half of Derek Carr’s completions for the night were to Cooper. Even Carr’s interception was an intended pass to Cooper in the endzone.

Cooper did nothing to dissuade fantasy football owners from using an early round pick in their fantasy drafts on the rookie wideout. While the sample size is small, it seems that the Raiders will look to target Cooper often.

The Raiders selected the Alabama wide receiver fourth overall in the 2015 NFL Draft. Oakland hopes Cooper can add some much needed offensive explosiveness to their offense. They also added veteran receiver Michael Crabtree.

Oakland is quietly building a talented, young nucleus. Quarterback David Carr enters his second season. Carr was arguably the best quarterback of all rookies last season. Running back Latavius Murray showed flashes of brilliance last season in a limited workload. If Murray can stay healthy, he is expected to win the starting running back position.

Cooper had quite the impressive college football career. In his three seasons with Alabama he had 228 receptions for 3,463 yards. He averaged 15.2 yards per reception. Amari was widely considered the best receiver in college football and was a finalist for the Heisman Trophy. 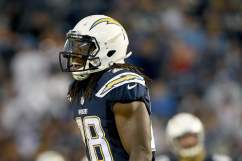