Jameis Winston had an impressive performance in his second NFL preseason game against the Cincinnati Bengals. Winston played for about a quarter and a half of the Monday Night Football Game. He finished the night 8-of-13 with 90 passing yards and a rushing touchdown. Here are all the details on Winston’s performance:

Winston Scored a Rushing Touchdown for the Bucs

Jameis Winston had a great start as he led the Buccaneers on an opening touchdown drive. The drive included a 16-yard pass to Vincent Jackson and an 11-yard pass to Austin Sefarian-Jenkins.

On a goal line set, Winston rolled out to his right and saw open space. He dived toward the pylon and scored his first NFL touchdown. The Bucs hope it is the first of many at Raymond James Stadium.

Winston favored his ankle throughout a series midway through the 2nd quarter. Jameis limped off the field, and did not return to the field. This was Winston’s last throw.

ESPN’s Lisa Salters reported that the Bucs chose to play backup quarterback Mike Glennon, but they said it was not due to an injury. It is certainly interesting timing for Winston to limp off the field and not remain in the game.

ESPN’s fantasy analyst Matthew Berry notes that Jameis might be underrated on his rankings. The jury is still out as to whether the rookie quarterback is worth a late-round flyer in your fantasy draft. His interception numbers at Florida State were high and his first NFL season could be full of turnovers as well. If your league gives negative points for interceptions, it could be wise to pass on Winston. 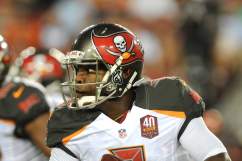