Third-string quarterback Landry Jones is preparing for the biggest start of his career. Ben Roethlisberger is dealing with shoulder injuries, forcing Jones into the starting lineup for Sunday’s divisional playoff meeting with Denver. Jones made his debut this season against the Arizona Cardinals, leading the team from behind and securing his role as the backup ahead of Michael Vick.

Before this season Jones, who broke records in college at Oklahoma, had yet to play in a regular season NFL game and played sparingly in preseason. During the preseason, it was clear that this was Jones’ biggest year to prove his value to the club. Sunday in Denver is sure to be his biggest chance yet.

Here’s what you need to know about the former Sooner:

1. Jones is Expected to Make His First Postseason Start Sunday

Before the start of the season, Jones had never thrown a pass in an NFL game. This weekend, he could lead the Steelers to a AFC Championship berth.

Ben Roethlisberger is recovering from multiple shoulder injuries, and the Steelers are preparing for Landry Jones to start. To compound problems, Antonio Brown is also dealing with concussion problems, putting even more strain on the Steelers attack.

2. He Started 50 Games at Oklahoma

Named after legendary coach Tom Landry, Jones was the top high school recruit in New Mexico in 2007. After being recruited by several big-time programs, Landry chose Oklahoma, which already had Sam Bradford as their quarterback at the time. Landry redshirted his freshman year, but started ten games the next year after Bradford injured his shoulder. Landry would lead all freshman in touchdown passes that season with 26, and would finish with a school-record 123 TDs.

In NFL scouting reports, Jones being rushed into big games to replace Bradford may have hurt his development. Reports say he lacks composure under pressure, and doesn’t have a short memory when it comes to mental mistakes. Landry had the gaudy numbers to be worthy of a fourth-round draft pick, but the preseason will determine if he can develop the consistency needed to be an effective quarterback.

3. He’s Half of an Oklahoma Power Couple

Many thought Jones would enter the NFL draft after his junior season, but he elected to stay. The reason may have been his engagement to basketball player Whitney Hand, another star Sooner. The two were married in Fort Worth, Texas in July 2012. That same year, Jones played his senior season and threw for over 4,000 yards with 30 touchdowns.

Unfortunately for Hand, her senior season was not as successful. She tore her ACL in the ninth game of the season, ending her collegiate career. In April 2013, Jones and Hand were both drafted into professional sports. Despite her injury, Hand was selected in the third round o the WNBA Draft by the San Antonio Silver Stars. Two weeks later, the Steelers grabbed Jones in the fourth round. 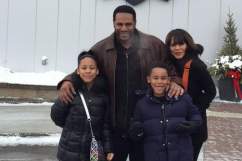 4. Jones is Vocal About His Faith

Jones is passionate about Christianity. He admitted to being depressed in his early seasons at Oklahoma, when he was redshirted and a backup to Sam Bradford. He considered quitting football entirely, and contributes his recovery to an increased focus on his faith. Jones was raised in a Christian family that was active in church, and has stated that he wants to work in the ministry after football.

Jones talks about his experiences in “I Am Second”, a YouTube series featuring pro athletes talking about discovering faith. Other videos include Chris Coghlan of the Chicago Cubs, NFL linebackers Sam and Emmanuel Acho, and fellow Sooner Sam Bradford. Jones’ twitter bio reads, “In everything you do, work as if you are working for the Lord.”

At 26 years old, this was an important year for Jones to prove himself to the Steelers coaching staff. He responded well in the preseason, earning lots of playing time behind Roethlisberger. Coach Mike Tomlin stated in the summer that while Landry had done well in practice, it meant nothing if it didn’t transition to in-game action.

“His performance has been on a steady incline out there, but that is out there,” Tomlin said. “We prepare and play out there for what transpires in stadiums, and I am excited to watch him play.”

Unfortunately for Tomlin, he got to see Jones play much more than he would’ve liked. Jones appeared in six games during the 2015 regular season, throwing 55 passes for 513 yards and three touchdowns. 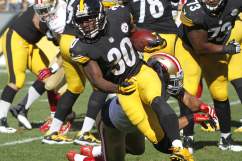 Read More
NFL, Pittsburgh Steelers
Landry Jones will open the preseason under center for the Steelers. Here's the lowdown about the former Sooner.