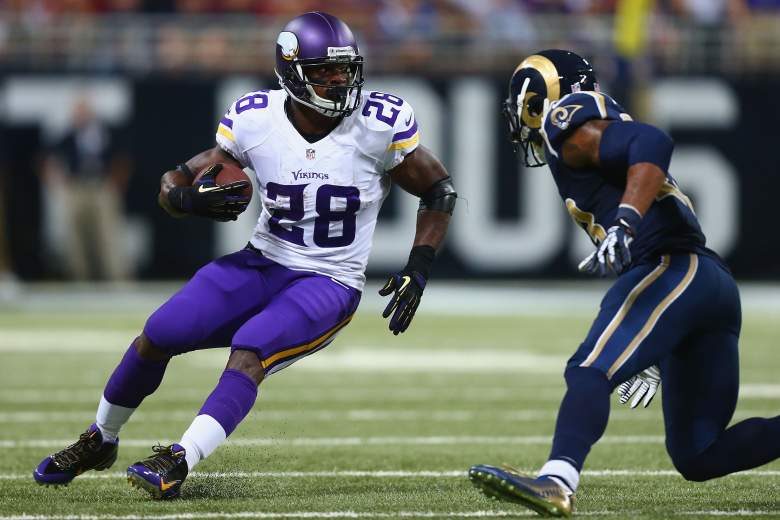 Adrian Peterson played in just one game in 2014, but will start on opening day for the Vikings. (Getty)

Adrian Peterson has been in the news both on and off the field for the better part of a decade. The former University of Oklahoma star and current Minnesota Viking is one of the best running backs in the NFL, but his personal life has also been under the microscope.

He is now married and has fathered several children, and still has a close relationship with his parents.

Here’s what you need to know about Peterson’s family:

1. Peterson Has Reportedly Fathered Between 6-8 Kids With Several Different Women

Peterson’s current wife, Ashley Brown, is pregnant with his possible eighth child. The baby is due in October. Current reports suggest the new child will be his seventh.

His oldest is Adjea, who is about 11 years old.

2. Peterson Plead No Contest in a Child Abuse Case Involving his Then 4-Year-Old Son

Peterson was arrested in September, 2014 after being accused of assaulting his son with a switch. Corporal Punishment is legal where Peterson lives, but the excessive nature of his son’s wounds brought his conduct into question.

He plead no contest to a misdemeanor charge in early November of reckless assault. The fine was $4,000 and he did not serve any jail time.

After the case was settled, the NFL suspended Peterson until April 15, 2015.

Peterson recently said he and his son have made up and that his relationships with his kids are strong.

One of the children who Adrian Peterson fathered, Tyrese Robert Ruffin, died in 2013 after suffering injuries at the hands of Joseph Patterson, the boyfriend of Ann Doohen. Tyrese was 2-years-old when he died.

Peterson was unaware he even fathered the child until after the alleged assault took place. He met his son while he was in a coma.

Peterson and Ashley Brown dated on and off during Peterson’s time at the University of Oklahoma, where the originally met. Brown posed for Playboy at the time as part of a “Girls of the Big 12” series.

After several years of on-and-off dating, the couple were reportedly engaged in 2010.

The couple finally got married in July 2014. They have yet to go on a honeymoon as a result of all the turmoil in the last year.

In addition to the new baby due in October, Ashley and Adrian are parents of another child together, 3-year-old Adrian Jr.

5. His Parents Were Both Standout Athletes

Adrian’s father Nelson Peterson was a former basketball player at the Idaho State University, but was unable to turn his athletic ability into a professional career. He turned to a life of selling drugs, and in 1999 he received a 10-year prison sentence for selling crack.

Nelson was married to Bonita Jackson, a former track star at the University of Houston and a state champion in multiple events in high school.

Adrian had one brother, Brian, but he died at age 9 as a result of being hit by a drunk driver while on his bicycle.