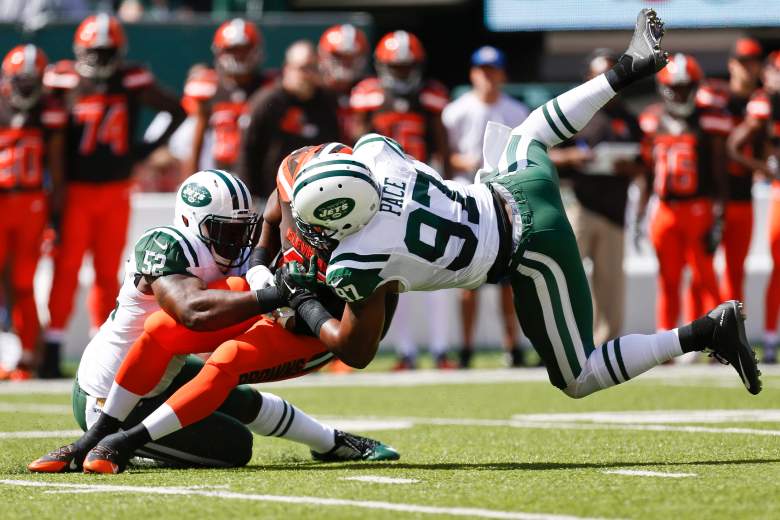 The New York Jets defense was nothing short of suffocating in their week one matchup against the Cleveland Browns. (Getty)

Gang Green started the Todd Bowles era in style, forcing five turnovers en route to a week on victory over the Cleveland Browns. It was the 11th straight season-opening loss for the Browns.

The last time the Jets recorded five-plus takeaways in a game was in 2010 against Buffalo. The last time it happened in an opener? 1984.

The defensive performance was a major bright spot on an afternoon that saw injuries take their toll on both squads. Cleveland Browns quarterback Josh McCown left the game after the first quarter with a head injury, leaving the game to Johnny Manziel who finished the day with an interception, two fumbles as well as 182 passing yards and his first NFL touchdown pass.

On the Jets side, cornerback Antonio Cromartie left the game early with an apparent knee injury and was ruled out for the rest of the opener. Rookie linebacker Lorenzo Mauldin was also carted off the field after a scary moment in the fourth quarter with head and neck injuries. He was taken to an area hospital.

Although the Jets defense was the collective star of the day, the offense wasn’t too shabby either. Ryan Fitzpatrick threw for 179 yards and two touchdowns, while Chris Ivory rushed for 91 yards and a pair of touchdowns as well. Brandon Marshall looked good in green and white, racking up a team-best 62 receiving yards and a TD reception.

Jets have 4 takeaways in this game. Had 13 all of last season. #nyj

Welcome back to New York, Darrelle.

Johny Manziel, facing a 3rd-and-18, tried to rack up some rushing yards in the fourth quarter but he ran into Darrelle Revis. The defensive standout, in his first game back in green and white, recovered the ball and effectively shut down the Browns drive.

Rookie Lorenzo Mauldin forced the fumble and was part of a scary moment after the play when he was unable to get off the field on his own. He was carted to the locker room and was strapped to the spinal board. According to in-game updates, Mauldin was taken to a hospital via ambulance as soon as he was taken off the field.

The Browns turnover led to another Chris Ivory TD, this one a three-yard run for the running back.

A Marcus Williams INT Led to a Brandon Marshall TD

Marcus Williams, who came into the game after Antonio Cromartie went down with a knee injury, picked off Johnny Manziel in the early stages of the third quarter, giving the Jets offense the ball and setting up a Brandon Marshall touchdown.

The Jets marched down the field, taking advantage of the turnover, and Ryan Fitzpatrick ultimately found Marshall in the corner of the end zone for the score. While the TD reception was certainly important, it might not have even been Marshall’s most impressive catch of the drive. The former Bears WR tip-toed the sideline earlier on the drive, making sure to get both feet down and keeping the Jets moving. 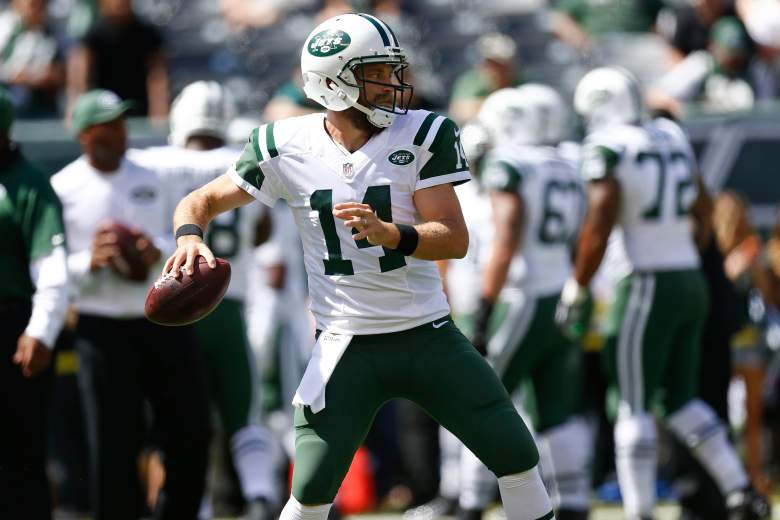 Ryan Fitzpatrick broke the 100-yard passing mark in the opening half of play against the Cleveland Browns on Sunday afternoon. (Getty)

A lot of things happened in these opening 30 minutes.

Welcome back to football, guys.

Manziel finished the half with 93 yards and a touchdown while Jets quarterback Ryan Fitzpatrick looked good, going 11-for-17 for 144 yards and one touchdown pass. Chris Owusu continued his strong receiving play for Gang Green, racking up a team-best 56 receiving yards in the opening half.

Great throw by Fitzpatrick, a 15-yard TD to Decker. A huge drive by the Jets, who needed some positive mojo. #nyj

Eric Decker put Gang Green on top in the waning moments of the second half with a beautiful reception as Ryan Fitzpatrick found him in stride into the end zone.

Decker got in the secondary after beating Cleveland defensive back K’Waun Williams on the play. It was exactly the kind of offensive moment the Jets needed as New York had struggled in the opening 30 minutes of play to find much consistency.

Antonio Cromartie Left the Game With an Apparent Knee Injury

Cromartie being carted to the locker room with a towel over his head. Looks like a left knee injury. #CLEvsNYJ

One of the biggest factors of the Jets secondary, Antonio Cromartie left the game midway through the second quarter with what appeared to be a knee injury. According to reports from the game, it did not appear to be a contact injury but looked as if Cromartie had planted his leg wrong and hyper-extended his knee.

Chris Ivory scored a touchdown. It was called back by a holding call on the offensive line. So, naturally, he scored again, on the very next play.

Ivory, who had an impressive preseaon with the Jets, juked and spun his way into the end zone, evading Cleveland defenders to put the Jets on the board midway through the second quarter. 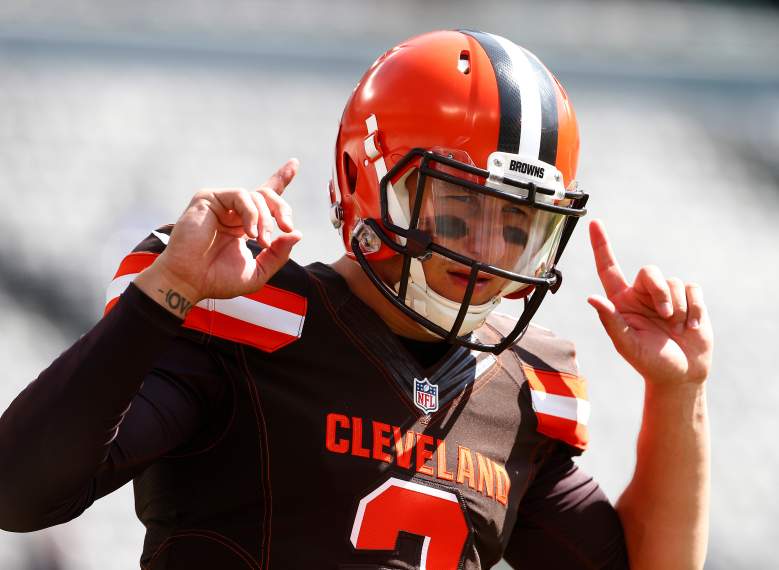 Manziel entered the game in the second quarter after starting quarterback Josh McCown suffered a head injury earlier in the game. He made his impact known immediately.

The man they call Johnny Football connected on the Browns’ first TD of the year – and the first touchdown of the game – on a 54-yard strike to Travis Benjamin. Cleveland made New York’s vaunted secondary look slow on the drive:

And the place is silent. Cromartie burned on 54-yard TD, Manziel to Benjamin. Brutal defense. How does a WR get that open on 3rd and 20?

Check out the play here:

Antonio Cromartie Recovered a Browns Fumble in the End Zone

After an impressive opening drive by the Cleveland Browns, that saw Josh McCown and the offense dismantling the New York Jets defense, Gang Green forced a turnover in the end zone. Antonio Cromartie recovered the ball for a touchback after McCown went air-born trying to get in for the touchdown.

The Browns had held the ball for over nine minutes of the first quarter before losing possession late in the period. Demario Davis caused the fumble and Cromartie was able to dive on it, losing his helmet along the way. McCown left the game shortly after the play, heading into the locker room to be evaluated for a possible concussion. Johnny Manziel was spotted warming up on the sidelines in the waning seconds of the first quarter: 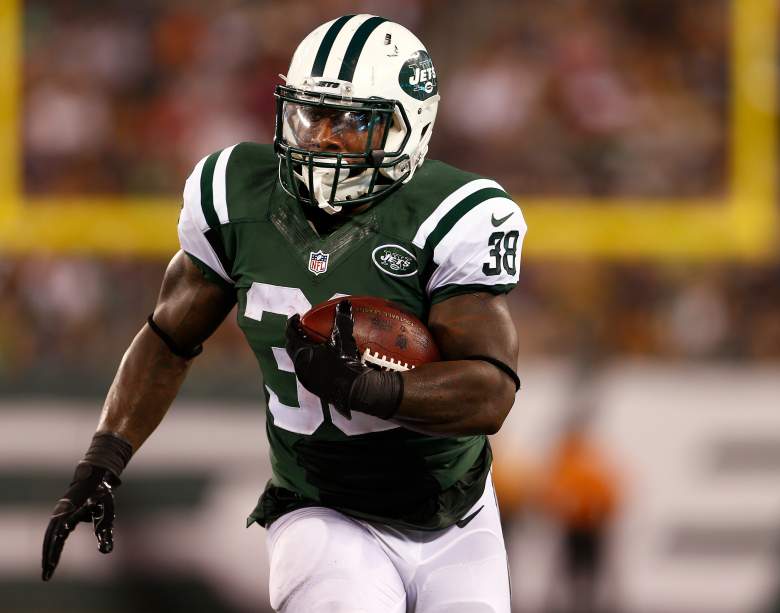 The New York Jets are the sixth NFL team of Ryan Fitzpatrick’s career. The Harvard grad has criss-crossed league over the past 11 seasons and came into the Jets organization with the understanding that he, probably, would be the back-up behind Geno Smith.

Then, of course, the preseason happened. Smith was punched, broke his jaw, and, suddenly, Fitzpatrick was New York’s starter under center. It could be his defining moment. Fitzpatrick had a productive preseason and he’s got some of the league’s most under-the-radar weapons on offense, including Chicago transplant Brandon Marshall. If Marshall can catch touchdowns on one working ankle in the Windy City, he should be able to haul it in now that he’s in the New York.

He’s also feeling confident. “The way I’m thinking about the game is maybe a little different now than it was five years ago,” Fitzpatrick told The New York Post. “There is a learning process and you just come to the realization that you’ve got to focus on the things that make you successful.”

On Sunday afternoon, the things that can make Fitzpatrick successful include his ability to find the holds in Cleveland’s secondary. The Browns secondary was among the best in the league last year, led by cornerback Joe Haden who racked up 73 tackles and three interceptions last season. 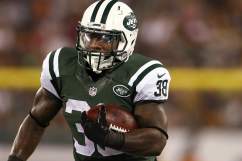