Don’t worry, DeShone Kizer is here to save the Notre Dame football season.

Or at least he’s going to try.

The Ohio native, who didn’t seen a minute of on-field action in 2014, stepped into the role of starting quarterback for the Irish after Malik Zaire went down with a season-ending ankle injury against Virginia in week two.

Kizer led Notre Dame to a dramatic, final-second victory over the Cavaliers but now he’s facing the rest of the season with the Irish. So, who exactly is Kizer and what can he do for Notre Dame’s injury-prone offense. Here’s what you need to know:

1. Kizer Led Notre Dame to a Victory Over Virginia in His First College Football Game

Well, that’s a way to start.

Kizer stepped into his first college football game against Virginia after starting quarterback suffered a nasty, season-ending ankle injury late in the third quarter. The television broadcast wouldn’t even replay the injury.

Despite the less-than-ideal situation Kizer handled himself well in the pocket and led the Irish to a victory over UVA with a 39-yard go-ahead touchdown pass to Will Fuller with 12 seconds left in regulation. It was exciting. It was dramatic. It was one heck of a start.

DeShone Kizer on the final drive: "It was time to play football. That's how I looked at it."

Of course, there were some shaky moments. By the final whistle, Kizer finished 8-for-12 for 92 yards and tow touchdowns with a QBR of 75.1. Still, he looked shaky at times and visibly nervous. Expect some of those nerves to be gone in week three after a full slate of practices with the Irish’s first-team offense. 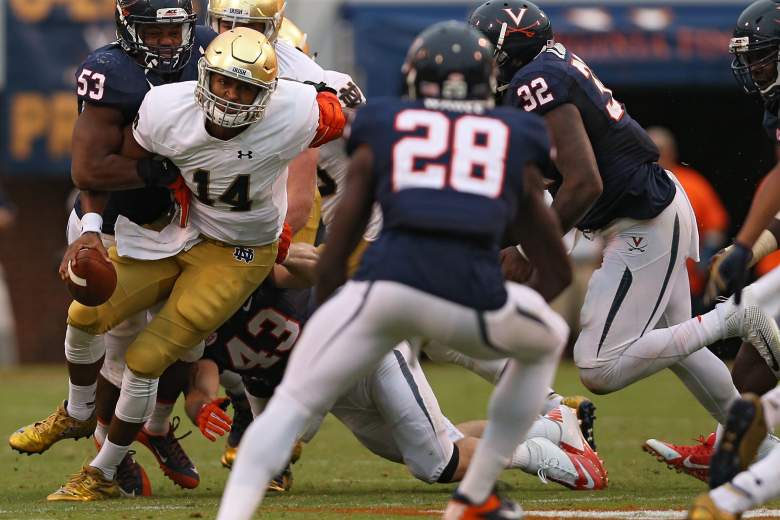 According to his bio on Notre Dame’s athletic website, Kizer did not see a single minute of game action during 2014.

In fact, he split most of his time between the Irish “regulars” and the offensive scout team during game preparation. His technical role with the team was third string quarterback.

It wasn’t an easy year for Kizer, who faced a handful of off-field issues, including an understandable distraction when his girlfriend had a baseball-size tumor removed from her neck during a 17-hour surgery in April. In the Blue-Gold game that month Kizer was just 1-for-5 for three yards and was sacked once. He texted offensive coordinator Mike Sanford afterwards: “In order to be great you have to hit rock bottom. And that game for me was rock bottom.”

Kizer had an impressive high school career at Toledo Central Catholic and was a consensus four-star recruit when he graduated. As a senior he was named the Associated Press Ohio Division III co-offensive player of the year and a first-team quarterback on the AP Division III All-Ohio team.

In 2013, his senior season, Kizer completed 150 of 245 passes and threw for 2,847 yards and 30 touchdowns with just six interceptions. The performance was good enough for second-best in Central Catholic history.

Kizer was recruited by just about every top college football program in the country, including Alabama, LSU and Michigan State with the notable exception of Ohio State. 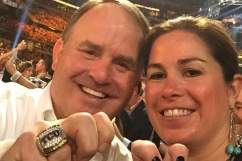 After a freshman season that saw minimal on-field action, Kizer spent the better part of the offseason working with the team’s brand-new offensive coordinator Mike Sanford.

In his second year of college ball, Sanford retooled his body, slimming down to 230-pounds that better fit his 6-foot-4 frame. It also made him quicker, more agile and able to break out of the pocket when pressure came through. Although the Irish were focusing on projected quarterback starter Malik Zaire, Sanford told ESPN that he “tried to put (Kizer) in that hot seat.”

Although he spent hours on the field with Kizer, even Sanford said he was impressed with the QB’s performance against UVA, particularly after Kizer assured a victory:

And he said it in a way that the conviction was sincere. I’ve been around backups who say something like that, but you can hear that flutter in their voice. With DeShone, there was no flutter whatsoever. He meant it.

5. Kizer Had Been Recruited By Notre Dome For Years

Kizer was recruited by over a dozen college football programs, but he was always committed to Notre Dame. (Twitter)

The Ohio native has been prepping for his moment in the Notre Dame spotlight for years. In fact, Kizer received an offer from the Irish the summer before his sophomore season in high school. He immediately scheduled a visit for the following weekend.

Kizer verbally committed during that weekend in South Bend. He told ND Insider after committing:

The fact that I can go to a school that is that prestigious and has the winning tradition that they do and the level of football that they play at, there’s no better place for me to be.

Kizer maintained his commitment throughout high school, something that has become a bit of a rarity for top-tier high school recruits, and officially signed with the Irish in February 2014.