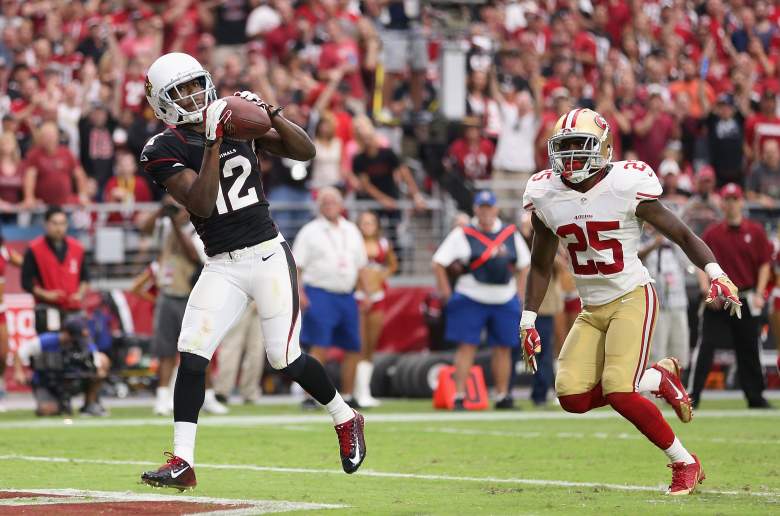 When it comes to DraftKings NFL, wide receivers are premium players.

The top 4 highest salaries for Week 1 are wideouts — Julio Jones ($9,300), Odell Beckham Jr. ($9,200), Demaryius Thomas ($9,100) and Dez Bryant ($8,700). Those guys are the No. 1 options for top-notch quarterbacks and see plenty of targets each game. It would be wise to have at least one on your fantasy roster. Two, if possible. The best WRs in the league will rack up points for your fantasy team. Especially these 4, and certainly in Week 1, where they all have favorable matchups.

Here is how wide receivers accumulate points in DraftKings:

So from this we can tell touchdowns are great, but you also want a receiver who is going to see a high-volume of pass targets. The more targets, the better the chances of hauling in receptions, piling up yards and scoring TDs.

But with a $50,000 salary cap and 9 positions to fill, you’re not going to able to stock your squad with the biggest names. And that’s A-OK because the wide receiver position is so deep. With so many teams airing it out so much, there are plenty of passes to go around. There are also plenty of bargains, meaning WRs with salaries under $6,000. We’ll get to them in a minute, though.

As for the fantasy games offered in Week 1, the biggest is the NFL Millionaire Maker contest, which is handing out a record-setting $10 million in prize money. The entry fee is $20 and the contest pays $2 million to the top finisher.

Here are some of the top bargains for the Week 1 wide receivers:

Jarvis Landry, Dolphins: at Redskins, $5,600 — The Dolphins added a slew of receiving options in the offseason and this year might resemble a nest of baby birds vying for mama bird’s attention and the worm she just returned with. OK, perhaps that’s a stretch of an analogy, but you get the point — it’s going to be crowded and competitive. Yet Landry is the No. 1 baby bird (OK, I’ll stop with the birds) in QB Ryan Tannehill‘s eyes. Landry racked up 111 targets in 2014 and is good bet to see 10 vs. a sub-par Redskins secondary. He’s more of a possession receiver, but could be an 8-catch, 75-yard player in Week 1. And I’ll gladly take those 15-16 fantasy points at that price.

Kendall Wright, Titans: at Buccaneers, $5,100 — Wright saw his targets dip by 47 from 2013 to 2014, but he’s built up quite the rapport with rookie QB Marcus Mariota during the preseason. It’s always wise to get on the good side of a first-year quarterback. The Titans’ running game isn’t exactly in the best shape (Bishop Sankey? Please.), so Wright could be busy against Tampa’s porous secondary.

Doug Baldwin, Seahawks: at Rams, $4,600 — The Seahawks are run-heavy and added TE Jimmy Graham in the offseason, but Baldwin is clearly the Seahawks’ No. 1 wideout. Does that translate to fantasy success, though? It doesn’t guarantee it, but Russell Wilson has complete trust in Baldwin, who torched the Rams in St. Louis in 2014 (7 catches on 11 targets for 123 yards and a TD). The price is right here if you’re in a salary pinch.

John Brown, Cardinals: vs. Saints, $4,500 — With Michael Floyd ailing and Larry Fitzgerald aging, Brown becomes an attractive Week 1 option vs. the usually-beatable Saints. Carson Palmer is back and presumably healthy after missing much of 2014. But when he did play, Palmer threw 11 TDs, including 3 to Brown. This one could be a back-and-forth game, meaning Brown could be in line to see a hefty amount of targets, especially if Floyd sits out.

Davante Adams, Packers: at Bears, $4,400 — Adams is the starter with Jordy Nelson out for the season (preseason ACL tear — thank you, stupid preseason). And with arguably the best QB in the league, Aaron Rodgers, throwing you passes, you immediately become a fantasy factor. Couple that with the inexpensive price, and Adams could be the most-used wide receiver (or player, for that matter) in DraftKings Week 1. He likely won’t put up Nelson numbers (13 TDs on 98 catches), but the Bears have been brutal against the pass in recent seasons.

Eddie Royal, Bears: vs. Packers, $3,900 — Royal could be a sneaky play vs. Green Bay at that price. While the Packers are a decent pass defense, they might lose sight of Royal as they focus on stopping Alshon Jeffery, Matt Forte and Martellus Bennett. We know Jay Cutler is going to sling it (albeit sometimes to the other team) and with the Bears missing rookie Kevin White (PUP – surgery), Royal is going to see a lot of snaps and likely enough targets to make a fantasy impact.

Corey Brown, Panthers: at Jaguars, $3,000 — “Philly” Brown has been named a starter at receiver for Week 1. With Kelvin Benjamin out and rookie Devin Funchess still pretty raw, that Panthers’ receiving corps is kind of, um, well, just take a look here. Yeah, not pretty. But someone needs to catch Cam Newton’s passes (right?). We know TE Greg Olsen will and Brown has the kind of speed to make some plays. That $3,000 salary is the lowest among WRs and the mostly-unproven surprise starter could be a flier who pays off. In DraftKings sometimes you need to go off the grid and use a player who won’t be widely owned. It could lead to a much richer pay out.