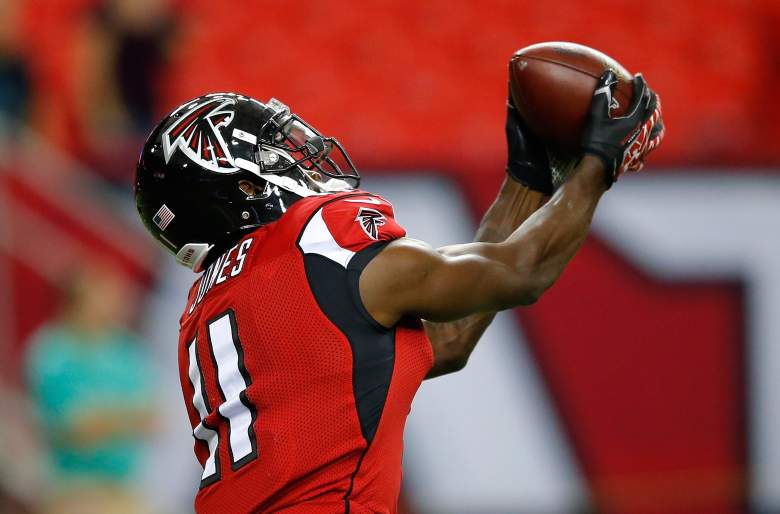 Julio Jones had two touchdowns and 141 yards receiving on Monday night in the Falcons’ win. (Getty)

Atlanta safety Ricardo Allen intercepted Sam Bradford’s final pass of his first game for the Eagles, putting an exclamation point on an exciting Monday night 26-24 Falcons win at the Georgia Dome. It was the first Monday Night Football game of the 2015 season.

After shooting out to a 20-3 halftime lead seemingly effortlessly, the Falcons lost momentum in the third quarter and the game ended just in time for Atlanta. Philadelphia closed the game on a 21-6 run before falling just shy.

Both quarterbacks showed flashes of brilliance. Ryan threw for 203 yards and two touchdowns in the first half, while new Atlanta head coach Dan Quinn’s defense shut down Bradford over the first 30 minutes.

Bradford and fellow new Eagle, running back DeMarco Murray, came out roaring in the second half. Bradford started to pick apart the Atlanta defense while Murray scored two timely touchdowns in the third quarter to get Philadelphia back in the game.

The Eagles took the lead for the first time in the fourth quarter following a Ryan Mathews midway through the final frame, but Matt Bryant’s fourth field goal of the night for Atlanta, followed by Allen’s pick, sealed the deal.

Bradford finished 36-of-52 for 336 yards, one touchdown and two interceptions. Ryan
went 23-34 for 298 yards, two touchdowns and two picks. Falcons star receiver Julio Jones had 9 receptions for 141 yards and two touchdowns in the win.

In what has become a back-and-forth affair, the Falcons regained the lead with just over six minutes to go in the game, 26-24.

Bryant is now 4-of-4 on field goal tries on the night. 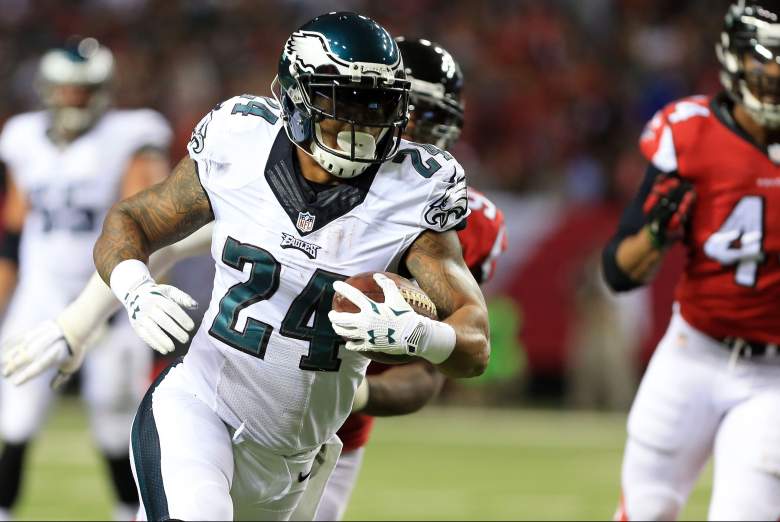 Ryan Mathews scored a touchdown that put the Eagles ahead in the fourth. (Getty)

Ryan Mathews scored on a 1-yard run to cap an 80-yard drive for Philadelphia.

The Eagles have come roaring back from a 17-point first-half deficit to take a 24-23 lead midway through the fourth quarter in Atlanta.

Matt Bryant’s third field goal make, a 44-yard attempt, ended a run of 14 unanswered points by the Eagles. The Falcons lead early in the fourth quarter, 23-17.

Bryant is now 3-for-3 on the evening. 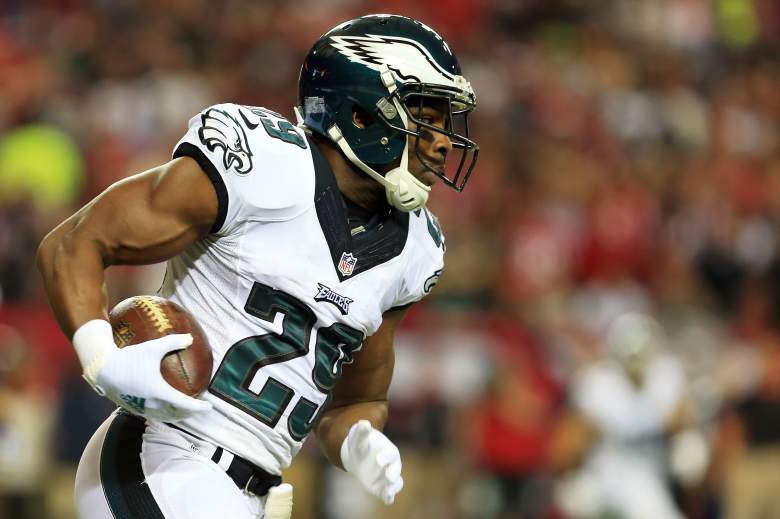 DeMarco Murray had two touchdown in the third. (Getty)

The Eagles looked down and out after two quarters on Monday night, but a strong showing in the third period has them back in the game.

DeMarco Murray has just 29 total yards so far (23 receiving and 6 rushing), but has gotten into the endzone twice.

It’s just a one-possession game heading into the final frame for Sam Bradford, DeMarco Murray and the Eagles, who look as if they’ve started to figure things out offensively.

Murray Does it Again on Impressive Eagles Drive

DeMarco Murray caught a 5-yard pass from Sam Bradford with less than 4 minutes remaining in the third quarter, cutting the Eagles deficit to 20-17.

Sam Bradford was 9-for-10 for 91 yards on the touchdown drive, and the Eagles offense seems to be settling in after a subpar first half. Murray now has two touchdowns in the third quarter.

Eagles safety Walter Thurmond intercepted a Matt Ryan throw early in the third quarter, setting up an eight-yard run by DeMarco Murray, the first of his Eagles career. The score trimmed the Falcons’ lead to 20-10.

The interception was the second of the game for Matt Ryan. 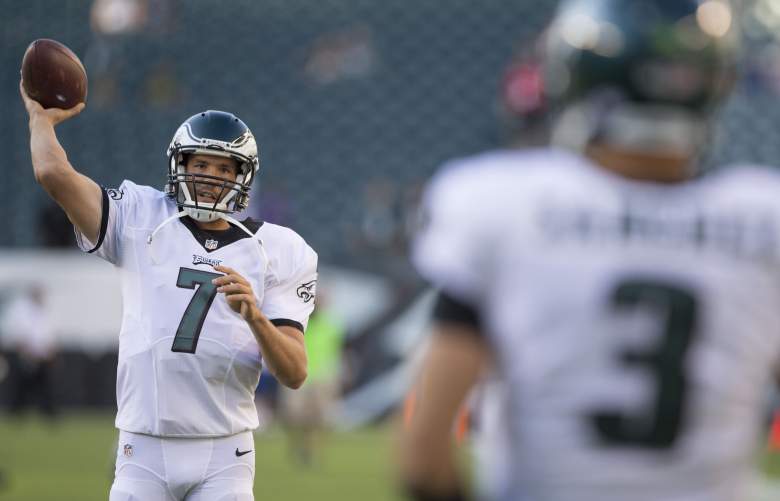 Sam Bradford has struggled in his NFL debut. (Getty)

The Atlanta Falcons lead the Philadelphia Eagles 20-3 at the half on Monday night at home.

The Falcons, behind Matt Ryan and the passing attack, have led throughout. Ryan is 16-22 for 203 yards and two touchdowns. Julio Jones has led the way for the Atlanta receiving corps with 97 yards and both of Ryan’s touchdown throws. Roddy White has also pulled in three receptions for 70 yards.

Perhaps as big of a story has been the inefficiency of Sam Bradford and the Eagles offense. The Eagles have only been able to muster six first downs and 125 total yards. Dan Quinn, the new Atlanta head coach, has seen his defense shut down the run entirely. The Eagles have rushed for just eight total yards, including -4 by DeMarco Murray, leaving the offense entirely in the ineffective hands of Sam Bradford. Bradford’s gone 15-of-27 for 117 yards and an interception.

The Eagles will likely have to revise their gameplan out of the gate to begin the third quarter in order to get back into the game.

In what was a crazy sequence of events in the half’s final minute, Julio Jones hauled in his second touchdown pass of the night, a 22-yard strike from Matt Ryan.

Just prior to the play, a Matt Ryan fumble was nullified by a penalty. Just before that, Sam Bradford threw an interception as he faced pressure from the swarming Atlanta defense.

Falcons Go Back up by 10

Matt Bryant knocked in his second field goal attempt of the game, a 39-yarder to give the Falcons a 13-3 lead with just over a minute to go in the half.

Parkey Puts Eagles on the Board

Code Parkey connected on a short field goal to give the Eagles their first points of the 2015 season.

The Falcons led, 10-3, midway through the second period.

The Matt Ryan-to-Julio-Jones combination has proven highly effective thus far. Jones hauled in a four-yard score from Ryan to increase the Falcons’ lead to 10-0 over Philadelphia.

Jones now has six catches for 66 yards and a touchdown in what could shape up to be a huge night for the Atlanta wideout.

Falcons Control Tempo After One

The Eagles’ offense has looked a step off to start on Monday night. Matt Ryan and the Falcons lead 3-0, and would be up two scores if not for a fabulous, touchdown-saving play by Kiko Alonso midway through the quarter.

The Falcons have 126 total yards as compared to Philadelphia’s 35 yards. Matt Ryan is 7-of-11 for 111 yards, including four completions to Julio Jones for 54 yards.

What looked to be a scoring drive for the Falcons ended by a fantastic, leaping interception by Kiko Alonso of the Eagles against Matt Ryan.

Matt Ryan led Atlanta on a 7-play, 52-yard drive that included big completions to Julio Jones and Roddy White on their first possession.

Matt Bryant capped the drive with a 41-yard field goal.

The highly anticipated debut of Sam Bradford and this new-look Eagles offense was off to an inauspicious start on Monday night.

The Falcons’ defense, led by former Seahawks mastermind Dan Quinn, didn’t allow a first down as the Eagles punted it away to begin the game.

Now that the oft-hyped reserve quarterback Tebow is out of the picture, focus now shifts on who will be the long-term No. 1 QB for Philadelphia. Sam Bradford, who hasn’t played in a regular season game since 2013, leads the Eagles into Atlanta for a Monday night showdown with the Atlanta Falcons in Week 1.

Waiting in the wings is last year’s Eagles signal caller, Mark Sanchez. Philly finished with a ho-hum 9-7 record in 2014, missing the playoffs. Sanchez did, however, experience some success in Chip Kelly’s offensive system last year. So at the first signs of struggles by Bradford, one can expect the calls for his ousting to ring loud and clear from the Philly faithful. DeMarco Murray, who defected to Philadelphia from division-rival Dallas in the offseason, figure to play largely into the offensive gameplan as well.

Atlanta comes into this season with some fresh faces of their own. First-year head coach Dan Quinn looks to revive a defense that finished last in the league in 2014. First-round pick Vic Beasley and offseason acquisitions Justin Durant and Adrian Clayborn figure to play big parts in mending the defense, as well.

On the other side of the ball, the Falcons will rely heavily on familiar faces. Quarterback Matt Ryan and wide receiver Julio Jones looked as good as ever during the preseason.

This Battle of the Birds figures to be one of the best matchups in Week 1. Stay tuned for live game updates. 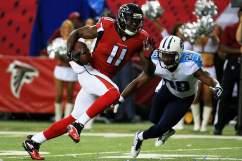 How to Watch Eagles vs. Falcons Live Stream Online