A high school football player in New Jersey died Friday night after he was hit during a game.

Evan Murray, 17, was the quarterback for the Warren Hills Regional High School team, Lehigh Valley Live reports. He was injured during a varsity game at Warren Hills’ home field against Summit High School.

Lehigh Valley Live reports that Murray walked off the field after the hit, but later collapsed. He was taken to the hospital, where he later died. The school district’s interim superintendent, Gary Bowen, said the community is “deeply saddened” by Murray’s death.

Murray suffered a lacerated spleen, according to NJ.com. Massive internal bleeding led to his death, the medical examiner said after an autopsy. He told the newspaper that Murray had an abnormally enlarged spleen that made him more susceptible to injury.

Here’s what you need to know about Murray:

“He walked off the field. And then he passed out, and a trainer came over, and they rushed an ambulance over,” Sevian Frangipane, Murray’s friend, said. “He got back up and looked at the crowd, but he looked sort of dazed. Like he had no idea where he was.”

He attempted to reassure his teammates and fans after the injury.

“He tried giving a thumbs-up to the rest of the team, and all of us cheered,” Kaitlin Bell, 16, a junior varsity cheerleader, told the New York Daily News. “Our coach was telling us he was going to be all right. We didn’t expect anything would happen.”

2. He Was a 3-Sport Athlete at Warren Hills

Murray, a senior, was a three-year starting quarterback for Warren Hills. He also played basketball and baseball at Warren Hills Regional High School.

“He is an amazing kid,” Taylor Coughlin, a junior at the school, told the news website. “He was in the National Honor Society. He was an amazing student and an amazing athlete. He stood out in his athletics, his academics — everything.”

3. A Fundraiser Has Been Set Up for His Family

A GoFundMe account has been set-up to raise money for Murray’s family.

“Evan was a bright kid who excelled in academics and in sports. Varsity QB since his sophomore year, varsity baseball pitcher, and varsity basketball Evan was always doing something to give back to his community. Please help us while we help the Murray family in their time of need. Donating anything with help!,” the account says.

“Warren Hills Regional High School is making available grief and crisis counselors who will be available to speak with the students this weekend so that moving forward they can access the services,” interim Superintendent Gary Bowen told Lehigh Valley Live.

4. Friends Have Taken to Social Media to Mourn & Remember Murray

Friends and teammates of Murray quickly took to social media to express their condolences and mourn the loss of the star quarterback.

I lost the love of my life last night. I miss you Evan and I love you indefinitely

Other tributes poured in:

A guy everyone wanted to be like. A true hometown hero. You'll be missed. You'll always be the leader of this team. pic.twitter.com/2u6Irlvhse

I will forever will be apart of the Blue Streak family. Breaks my heart hearing the devastating news losing a great leader in Evan Murray.

Can't believe the news I just heard. He was an amazing player taken way to soon… RIP Evan Murray you will be missed buddy❤️

scary to think how quick things can change.. rip to evan murray and thoughts with everyone at warren hills

Person you admire most: Evan Murray. Everyone looked up to you Evan. Rest in peace and fly high??? pic.twitter.com/L1HMlIIUGG

RIP Evan Murray, so sad to see someone go so young. My heart and prayers goes out to his family and the blue streaks tonight ?

Governor Chris Christie and the New York Jets were among others to offer their condolences on Twitter:

On behalf of all the people of New Jersey, Mary Pat and I send our heartfelt thoughts and prayers to the Murray family on the loss of Evan.

Our deepest condolences go out to the family and friends of Evan Murray.

Our thoughts & prayers go out the Warren Hills community & the family of Evan Murray.

Our hearts reach out to the family of Evan Murray and the Warren Hills High community. So deeply sorry for the loss.

5. He Is the 3rd High School Football Player to Die From On-Field Injuries This Year

Thoughts and Prayers for strength & comfort for the Murray family and Blue Streak Nation. A True Class Act. #RIPEvan pic.twitter.com/NFW2fgL7gT

Murray is the third high school football player to die this year from injuries suffered during a game.

Sophomore Tyrell Cameron died on September 4 in Franklin Parish, Louisiana. According to the New Orleans Times Picayune, Cameron was injured after he was tackled while returning a punt.

An Oklahoma football player died days after he was injured while making a tackle during a game on September 11, the Tulsa World reports. Ben Hamm, a junior linebacker at Wesleyan Christian School, was hurt during a kick return.

“It wasn’t an unusual hit, wasn’t a bigger hit than anything else. In fact, there wasn’t much that stood out about it,” school superintendent Rocky Clark told the World. 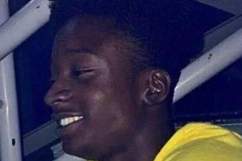