Charles James is hoping he has done enough to secure his place on the Texans roster (Getty).

On this season of Hard Knocks, no player had a bigger impact than CB Charles James. From his flashy socks to playing both ways, James charmed fans and coaches alike. James was likable, but that doesn’t guarantee him a spot on the Texans roster. Houston has a fine roster of defensive backs, and has needs at other positions. James is hoping his performance on special teams will be enough for him to earn a spot on the team.

Unfortunately for James, it’s hard to be an undersized corner in the NFL. James was cut by the Texans today, and will be looking for a role on the practice squad or with another team. James experimented on offense during training camp, but would never seriously be considered for the position in the regular season. The Texans lack depth at other positions, specifically lineman, and simply couldn’t afford to keep the charismatic James. What a sad end to Hard Knocks.

Hopefully we’ll see Charles get picked up in the near future. 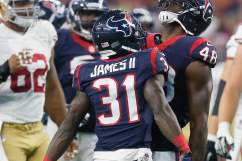 Read More
Football, Hard Knocks, Houston Texans, NFL
The MVP of Hard Knocks may not make it to the regular season. Check here to find out if Charles James has done enough to earn a spot on the Texans roster.