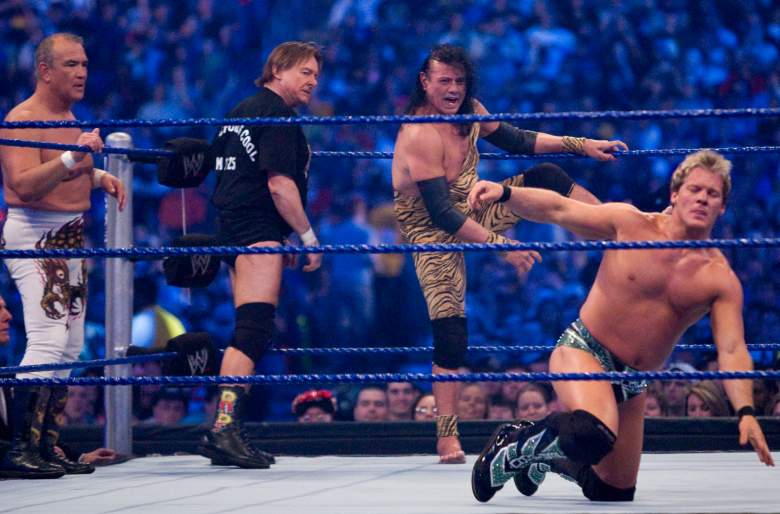 Jimmy Snuka (middle) returned to the ring as recently as 2009 in a match of fellow wrestling Hall of Famers. (Getty)

Jimmy “Superfly” Snuka, the former WWF star known for his high-flying finishes, was arrested at his New Jersey home on Tuesday morning, charged in the 1983 death of his former girlfriend.

The charges were announced, officially, at a news conference on Tuesday afternoon by District Attorney Jim Martin. Here’s what you need to know about Snuka and the case:

1. Snuka Will Be Charged With Third-Degree Murder & Involuntary Manslaughter

The long-time wrestling standout will be charged in relation to the death of his girlfriend, Nancy Argentino, in May 1983.

Snuka had been at a WWF taping at the Allentown Fairgrounds on May 10, 1983 and, according to reports, returned to his Whitehall Township motel room to find Argentino gasping for air with yellow fluids leaking from her mouth and nose.

Argentino was pronounced dead at Lehigh Valley Hospital the next day and an autopsy showed that she died of traumatic brain injures as well as more than two dozen cuts and bruises, consistent with being hit with a stationary object. Forensic pathologist Isidore Mihalakis suggested the case should be viewed as a homicide until proven otherwise.

2. He Was Arrested on Tuesday Morning

Snuka poses with his daughter, who now wrestles under the name Tamina Snuka for WWE, several years ago. (Facebook)

Authorities arrested Snuka, 72, on Tuesday morning at his New Jersey home. He was arraigned at approximately 1:50 p.m. at the Lehigh County Central Booking Center and sent to county jail under $100,000 bail.

The sister of Nancy Argentino told me this afternoon that the family is relieved with charges.

Lehigh County District Attonrey Jim Martin said at a Tuesday afternoon news conference that Snuka “was in the process of posting bail.”

3. The DA Reopened the Case Last Year After a Newspaper Investigation

The Call story brought forth a brand-new never-before-seen autopsy report and labeled the case as homicide, prompting Martin to start the investigation again. Martin brought the case before a Pennsylvania grand jury in 2014, explaining, “I think it’s important to have a grand jury take a look at it and we’ll see what they think.”

The grand jury’s term ended at the end of July and Snuka appeared before the investigation but did not testify.

According to Snuka’s wife, Carole, he was recently diagnosed with stomach cancer. Carole told Bill Apter that Snuka had recently undergone surgery to remove part of his stomach and his lymph nodes. Carole said of Snuka’s recovery:

He still has a long road ahead of him, and the doctor says he’s an amazingly strong man. We all know how strong Jimmy is, and Jimmy can take a beating. He also wants to let his fans know that he’s not done yet.

The hope was that the surgery was able to remove the cancer entirely, although neiter Snuka nor his wife have provided updates on his health since the August announcement.

5. He Maintained His Innocence for Over 30 Years

Snuka has never wavered from his story. In his 2012 autobiography, the former WWF star maintained his innocence, writing:

Many terrible things have been written about me hurting Nancy and being responsible for her death, but they are not true. This has been very hard on me and very hard on my family. To this day, I get nasty notes and threats. It hurts. I never hit Nancy or threatened her.

Still, it was difficult for some, particularly Argentino’s family, to ever fully believe Snuka’s account of that night’s events; particularly when that account changed depending on who he was talking to. The Argentino family said that the former wrestler told some people had had pushed Nancy that night while also telling others that she fell and hit her head on pavement.

According to authorities, Snuka originally told several people, including the responding officer, he had shoved Argentino earlier that day. He later told police those same people had misunderstood his description of the night. Snuka was the only person of the interest in the case but was never charged; until Tuesday.