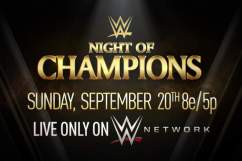 Here’s our extensive preview piece on each and every announced matchup that will appear on the title match filled card for WWE Night of Champions 2015!

Neville and The Lucha Dragons (Kalisto and Sin Cara) vs. The Cosmic Wasteland (Stardust and The Ascension (Konnor and Viktor) (6-Man Tag Team Match)

Predictions & Winners: This pre-show match looks like something straight of a comic book, doesn’t it? Neville and the always brightly colored Lucha Dragons are going to war with the “eccentric” Stardust and revived Ascension. This ongoing feud between Neville and Stardust has reached the point where two rival tag teams have entered it. This bout will definitely be a fun sprint. Expect plenty of high flying and crazy color combinations based on everyone’s attire. We see this beef continuing for another month, so we’re placing our bets on The Cosmic Wasteland. This new stable needs a big PPV win to make their existence worthwhile, so we see them getting the victory here and solidifying their newfound status.

Predictions & Winners: The New Day has managed to push back their latest challengers (The Prime Time Players) and now they have to deal with the returning Dudley Boyz. We popped as hard as you guys when Bubba and D-Von made their surprise return to the WWE. The The New Day is arguably the most entertaining trio in wrestling today, but their tag team title reign is being threatened by one of the GOAT’s of tag team wrestling. Our pick goes to The New Day, though. Now’s not the right time to take the titles off of such a great act. Expect some sort of interference or distraction from Xavier Woods, which will lead to his two stable mats screwing over The Dudley Boyz and retaining their titles. This one will carry on right into the next PPV.

Predictions & Winner: Lana’s absence from this passionate feud filled with fighting lovers has made us not care as much anymore. Ziggler is on his own now as he has to push back the powerful Rusev and deal with his new flame Summer Rae. Ziggler’s mind games have led to Rusev getting pissed off at his latest valet. These mind games will play a part in Rusev’s downfall at Night of Champions 2015. We see a bunch of shenanigans from Summer Rae’s part, which will lead to Rusev losing his focus once again. Ziggler will capitalize on Rusev’s failure to stay focused on the matter at hand and grab another sneaky win.

Predictions & Winner: The always entertaining (and potential WWE MVP of 2015) Kevin Owens has been a thorn in Ryback’s side lately. Ryback is back healthy and ready to stake his claim as a great Intercontinental Champion. His defense of the title at SummerSlam was surprisingly decent, but we know his bout with Owens will be a far better contest. Owens can damn near have an awesome match with a mop, so we know he can pull off a great one with Ryback. You might think we’re crazy here, but we think Owens will shock the WWE Universe like he always does and actually defeat Ryback for the IC Championship. Ryback needs a major beef to push him farther up the card. Losing his championship and being forced to get back to the top to defeat Owens is the type of storyline that could propel him even more. Owens will capture the IC Championship in shocking fashion here.

Nikki Bella (c) vs. Charlotte (WWE Divas Championship; If Nikki gets counted out or disqualified, she will lose the title)

Predictions & Winner: So Nikki Bella has broken AJ Lee’s record for being the longest reigning Divas champion in WWE history. Common sense says this was done to make Charlotte’s big win in this match that much more impactful. Having her win the title from the current longest reigning Divas champion is a nice co-sign, right? So yeah, Charlotte will become the champion and hopefully break Nikki’s title record during her 1st reign.

Predictions & Winners: So who could the mystery man be? We have no clue who it could possibly be, to be quite honest with you guys. We have a few guesses – Daniel Bryan, The Rock, Samoa Joe etc. But these picks are nothing but pipe dreams that we don’t see coming to fruition. Whoever the 3rd partner of Dean Ambrose and Roman Reigns turns out to be, we still see them taking the loss here to the reformed Wyatt Family. With a new “black sheep” member and a renewed focus, we don’t see them taking such a huge loss so early in their stable reinvention. This will be an awesome match, no doubt. But The Wyatt Family will come out on top. Expect this 6-man war to get even more intense at the next PPV and probably have new members added once Survivor Series 2015 rolls around.

Predictions & Winner: Rollins is working double duty! His SummerSlam 2015 title unification match with Cena was awesome, so we’re very much looking forward to this big rematch. As expected, both men will go above and beyond as they fight to stake their claim as the current US Champion. Rollins will once again reach into his bag of tricks and cheat his way throughout, while Cena will be there to combat the growing odds against him. Rollins will have some type of Authority aid (Big Sow, perhaps?) come his way and allow him to screw his opponent once more. Rollins will retain his US Championship through nefarious means, but we see the outcome of this match bleeding right into Rollins’ 2nd bout…

Predictions & Winner: Sting is finally going to compete for the WWE World Heavyweight Championship after all these years. Rollins will be depleted energy wise from his match with Cena earlier in the evening. So we see him playing the outside and keeping his distance from his legendary opponent. This match will turn into more of a brawl than a wrestling match, as Sting will chase Rollins down and look to quickly dispatch him. We see The Authority getting involved once again, but Cena will be there to cut them off and cause the match to get thrown out. This main event will end without a winner, which will then lead into a huge match being made for Hell in a Cell 2015 – Rollins vs. Cena vs. Sting in a Triple Threat match in the Hell in a Cell. Winner becomes both the WWE World Heavyweight and US Champion.

Head to the next page to check out a new infographic for WWE Night of Champions 2015!

This cool WWE infographic provides some stats and the type of info you may not have known about wrestling’s most legendary title holders. Pay a visit to this Rukkus blog preview piece on the upcoming PPV, too!