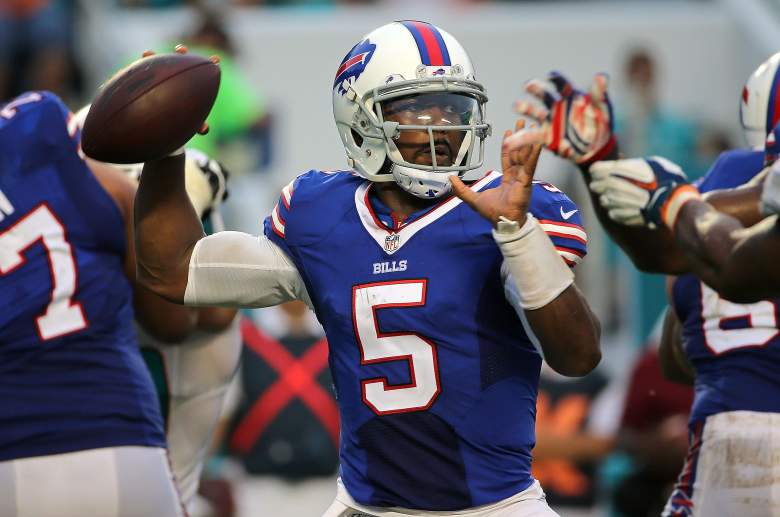 Tyrod Taylor has performed better than the Bills could have possibly hoped for so far in 2015. (Getty)

The Buffalo Bills are back on track after a road bump against the New England Patriots in Week 2. They clobbered the Miami Dolphins to improve to 2-1 in 2015 and will look to win their third game when the New York Giants come to Buffalo on Sunday.

The Bills are listed as 5.5 point favorites against the Giants (1-2) at sportsbooks monitored by OddsShark.com.

Buffalo was expected to be supported by its Rex-Ryan led defense, but so far in 2015 its the offense that’s leading the way. The Bills rank third in points per game (33.3) and 10th in yards per game (373). Tyrod Taylor won the preseason job at quarterback and is completing 74.4 percent of his passes, good for fourth in the league.

The Bills are averaging 152.7 rushing yards per game, good for first in the NFL.

The high-prized defense is struggling, however. The Bills rank 30th in yards allowed (400.7) and 13th in points allowed (22.7), and have just six sacks through three games.

The Giants picked up their first win of the season last Thursday, hanging on for a sloppy 32-21 win over the Washington Redskins at MetLife Stadium. They’ve struggled on defense thus far, ranking 31st in yards allowed (410.3) and 29th in sacks (three).

The Giants are 5-1-1 ATS in its last seven games when playing Buffalo, and 4-1 ATS in their last five trips to Ralph Wilson Stadium.

OddsShark’s predicted score calculator has the Bills holding a 27.7-17.5 advantage, about five points away from the number set by oddsmakers.

The teams have split 12 all-time meetings, including the Giants triumph in Super Bowl XXV.

The total for Sunday afternoon’s Giants vs. Bills betting matchup is set at 45.5 points at the sportsbook. The total has gone over in five of Oakland’s last six games on the road, and under in four of Chicago’s last six games overall.