T.J. Yeldon could be in for a big game against the Texans. (Getty)

Shorts has been no stranger to losing, and after being drafted by Jaguars in 2011, Shorts has seen his fair share of defeats. For a game that means a lot, it’d be better if he, along with his teammates, were healthy.

The first-year Texan is listed as probable with a shoulder injury ahead of Sunday’s meeting with his former team. Both teams are pretty banged up, but it’s Houston who is really hurting. The Texans are hoping they are not without both Clowney and Watt on the line, and are still waiting for Shorts and Nate Washington to fully heal.

Jacksonville has injuries, but they’re on their way back to health. DT Sen’Derrick Marks, a Pro Bowl alternate last season, is ready to make his 2015 debut. Marks tore his ACL last year in the season finale against the Texans, and his presence should cause problems for Arian Foster and the Texans line. The Jaguars also expect Paul Posluszny to make his return in the middle. Posluszny missed last week against the Buccaneers, when he watched his defense surrender 38 points. A healthy Marks and Posluszny is a big boost to the Jaguars, and it’s a big reason the spread is moving in the Jaguars’ favor.

Add in the news broke that Watt is sick, and it’s no surprise the money is moving towards Jacksonville. What opened as an even line is now Jacksonville -2 at some books, showing how little faith Vegas has in the Texans’ offense.

Expect a close game in Jacksonville. The Jaguars defense should look better, and if T.J. Yeldon can play, he could be in line for a huge game. 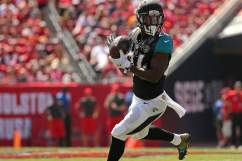 Read More
Football, Houston Texans, Jacksonville Jaguars, NFL
Blake Bortles and the Jaguars look to notch their second win of the season against the struggling Texans. All your gambling advice for the game lives here.