Florida State survived Miami is the best way to describe the in-state rivalry game. The Seminoles came away with a 29-24 victory and survived Miami’s comeback.

After trailing by double digits, the Hurricanes came back and took a 24-23 lead midway through the 4th quarter. As he had done throughout the game, FSU’s Dalvin Cook came up with a big play when the Seminoles needed it most. Cook scored his third touchdown on a 23-yard run. He finished the night with 22 caries for 222 rushing yards. He also had three receptions for 47 yards.

Here is how the game played out:

Miami Took the Lead Early in the 4th Quarter

Kaaya connected with Stacy Cooly on this 29-yard touchdown pass. The touchdown gave the Hurricanes the 24-23 lead early in the fourth quarter.

The Hurricanes Scored First in the Second Half

Miami cut the lead to three in the third quarter. After the touchdown pass, FSU led 20-17.

The Seminoles took a 10 point lead into halftime. It was all Dalvin Cook for the Seminoles in the first half. Cook had 9 carries for 137 yards and a touchdown. He also scored on a 36-yard screen pass.

Kaaya connected with receiver Rashawn Scott for a 17-yard touchdown pass. Scott made the catch then broke through Seminoles tacklers to find the endzone.

Cook had as hot of a start as a player can. For his second touchdown, Cook caught a screen pass and ran for the 36-yard touchdown.

FSU's Trey Marshall is ejected for targeting after a nasty hit on Brad Kaaya. #BeatFSU

FSU’s safety Trey Marshall was flagged for targeting. By rule, a player is ejected from the game for this penalty. Marhsall hit Miami quarterback Brad Kaya with the crown of his helmet.

Florida State’s Dalvin Cook caught the pitch from quarterback Everett Golson at just the right time and ran for the long touchdown. It was the first score of the game and gave the Seminoles an early 7-0 lead.

FSU is favored by nine points at home. It is one of the first big ACC conference games of the season. Keep it here for live updates and analysis throughout the rivalry game. 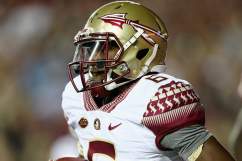 Read More
College Football, Football
FSU held on for a 29-24 over Miami on Saturday night. Find out more about the rivalry game with highlights, stats and analysis.