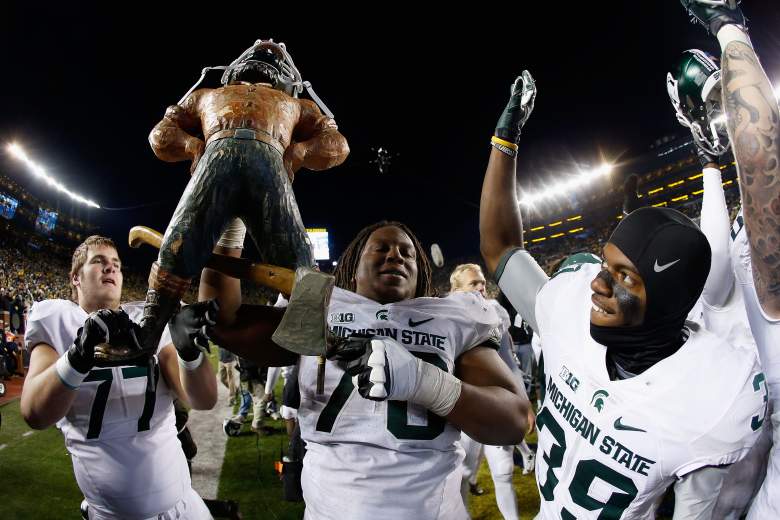 Michigan State and Michigan faced off in what turned out to be the game of the day. It was a shocking ending to what was a hard fought Big Ten rivalry game.

On fourth and long the Spartans were unable to convert for a first down and gave the ball back to Michigan with a little under two minutes left in the game. Michigan State only had one timeout remaining and the Wolverines were ahead 23-21. Michigan was able to run the majority of the clock down except for the final ten seconds. The plan was to punt the ball on what could have been the last play of the game.

The Michigan punter dropped the ball before he was able to punt it. Michigan State recovered the ball and ran it all the way to the endzone for a game winning touchdown as time expired. It was a gut-wrenching loss for Wolverines fans and an unbelievable win for Sparty.

Here is how the Spartans improbable victory happened:

If you predicted the first score of the game would be a fullback touchdown, you were right. Sione Houma punched it in for Michigan to jump out to a 7-0 lead in the first quarter. It seemed a good way to start the game in a rivalry that is typically led by defense and physicality.

The Spartans Responded With a Touchdown of Their Own

Right after a Michigan player was ejected for targeting, LJ Scott ran for an 11 yard touchdown. It tied the game up at seven midway through the second quarter.

Houma Scored His Second Touchdown of the Game

Michigan capitalizes on the failed fake punt with a TD! After 3 reviewed plays in a row, Sione Houma's touchdown stands

Touchdown, Michigan State. Connor Cook pump-faked, and it bought Macgarrett Kings Jr. an extra step for the catch. It's quite quiet here.

Cook threw a long bomb for a touchdown. The score made it 17-14 with Michigan leading by three.

Michigan State Used Their Fullback, Too

Cook hit his fullback Trevon Pendleton for a 75-yard pass that was originally ruled a touchdown. After review, he was ruled down about a foot from the goal. The Spartans were able to punch it into the endzone and the Wolverines lead was down to two points.

The Spartans Won on a Shocking Final Play

Michigan was in control for all of the game, except the final play. The Spartans recovered a botched punt to score the game winning touchdown as time expired. The Spartans beat the Wolverines 27-23. They were trailing 23-21 with 10 seconds left. It was fourth down and Michigan had to run the final play. 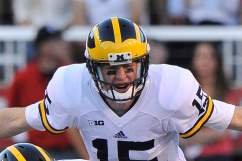 Read More
College Football, Football
Michigan State came away with a shocking win against Michigan as time expired. We have the highlights of the amazing comeback.