No need to adjust your television. That is indeed still the Ohio State Buckeyes, but their uniforms received a bit of a makeover. The Buckeyes are wearing new alternate jerseys that Nike made specially for them. They made their debut against Penn State. Over the past few seasons, the Buckeyes have incorporated alternate uniforms into their rotation of their normal scarlet and grey sets.

Why the sudden change? The biggest reason is recruiting. While football purist may not like the look of the all black combo in Columbus, many 17-year old kids love the flashier look. Ohio State Athletic Director Gene Smith told The Columbus Dispatch as much:

Recruits are impressionable today and have a great deal of materialistic interest. So, reality is, we’re going to respond to that. Our job, our core mission, is our student-athletes that we serve, first and foremost. And that includes the recruits we’re trying to attract.”

Aside from the backlash from traditionalist, there was also a slight problem on gameday. As you can see from the photo below, Braxton Miller’s last name was spelled wrong:

The Buckeyes and Nike hope the uniforms make a big splash in a different kind of way. 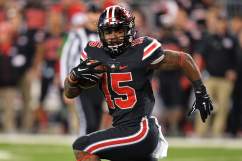 Read More
College Football, Football
Ohio State broke away from tradition with all black uniforms. We explain the reason for the Buckeyes change in apparel.