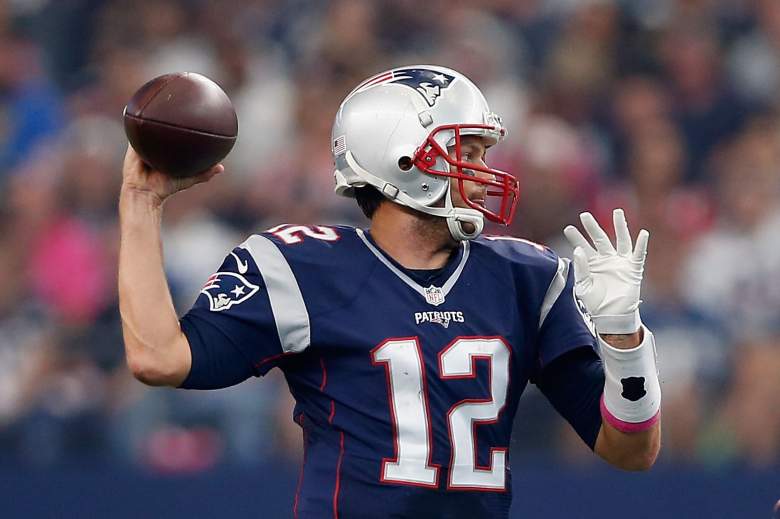 The New England Patriots quarterback suffered through some early-game pressure, including five sacks, to find his rhythm in the second half leading his team to a dominant victory over the Dallas Cowboys.

Brady racked up 275 passing yards, completing 20 of 27 pass attempts and throwing for two touchdowns. He also ran for another touchdown. Because of course he did.

The remaining fans in the stands are all chanting "Bra-dy! Bra-dy!"

By the final whistle, New England had out-gained the Cowboys 356-to-264 and kept Dallas out of the end zone for the first time 65 games.

In the end, it came down to mismatches. Dallas actually ran more plays (66) than the Patriots but the Cowboys averaged just four yards a snap while New England notched 6.5. Brady averaged 7.7 yards per pass attempt while Weeden notched 3.9 yards. The Patriots also won the turnover battle, forcing a Jason Witten fumble and picking off Weeden in the fourth quarter.

If there is a bright spot for the Cowboys here, it’s an upcoming bye week and a chance to reexamine what the squad is doing on the both sides of the ball. Of course, there are some rumblings of a possible Matt Cassel sighting sooner rather than later. Of course, that’s all in the future. For now, Dallas has to deal with three straight losses.

Click here to see a full box score of the matchup and read on for some of the game’s most highlight-worthy moments:

Julian Edelman Refused to Get Tackled on a TD Catch & Run

That is basically what happened. For real.

Julian Edelman caught the short pass from Tom Brady and then proceeded to run 59 yards, leaving Dallas Cowboys defenders in his wake on the way into the end zone. Seriously, watch this play:

Y’all ok there Dallas Cowboys defense? No broken ankles? Only metaphorically? Take some time to check because Dion Lewis just broke through an incredible 10-yard catch and run for a Patriots touchdown early in the third quarter.

It took a little while, but it appears the New England Patriots offense are now officially on video game mode.

Tom Brady Gave the Patriots the Lead With a Rushing Touchdown

If you start to rush Tom Brady in the passing game, he will find another way to beat you. Tom Brady will run that ball into the end zone himself. Check it out:

Brady notched the only touchdown of the first half with a one-yard quarterback sneak with just under four minutes left in the second quarter.

Not much going for either offense early on.

Brandon Weeden was sacked. Tom Brady was sacked. Twice. And the two teams combined for less than 100 total yards in the opening 15 minutes.

While the respective defenses looked good in the first quarter, the Patriots suffered an early setback as lineback Dont’a Hightower left the game with a reported rib injury.

That isn’t to say that Tom Brady isn’t still in control. Any other idea is almost laughable. No, Brady will still dictate tempo and throw touchdown passes to Gronk and slant routes to Julian Edelman.

This, instead, is about the Patriots run game.

Coming into Week 5, Dion Lewis has handled 55 percent of New England’s backfield attempts while LeGarrett Blount has racked up the majority of the rest. But it’s been an interesting split, more focused on giving Lewis the start and Blount looks on multiple tight end sets.

So, who gets the running edge this week against the Dallas Cowboys? Give it to Lewis. Why? The Patriots are nothing short of dominant when spreading the ball out and while Lewis isn’t exactly huge, he’s got the kind of speed that seriously take advantage of the Cowboys injuries in the linebacker corps and secondary.