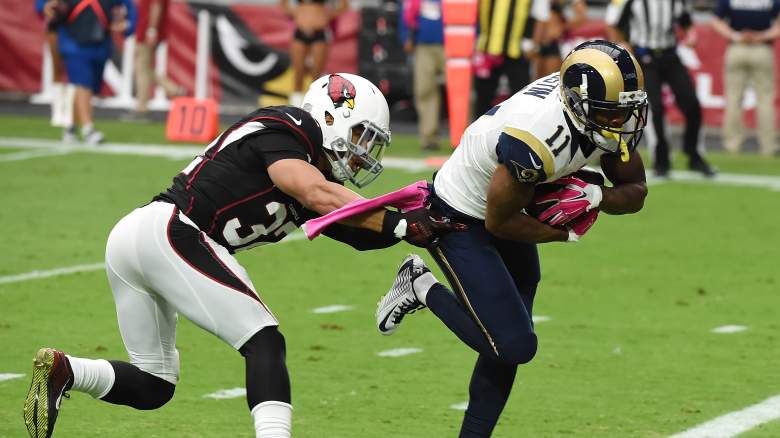 Welcome back to the fantasy radar, Tavon Austin. It’s been a while.

A top-10 pick in 2013, Austin did nothing but disappoint and underwhelm in his first two NFL seasons for the St. Louis Rams. However, he has shown signs of finally figuring it out this season, and in Week 4, he exploded for 116 yards (six catches for 96 yards, two carries for 20 yards) and two receiving touchdowns.

Here are a couple highlights from his monster day:

Tavon Austin just had a 12-yard touchdown, he also had this 47-yard catch earlier in the game – https://t.co/OEj2Hl5N4p

And another one. Tavon Austin with his second TD rec of the game. #WVU playing well for @STLouisRams pic.twitter.com/IubDlzSNvH

So, does Austin finally have fantasy value?

Not quite. Let’s not forget this is still supposed to be a run-heavy offense, and with explosive rookie Todd Gurley breaking out for over 100 total yards Sunday, that’s likely to continue. Moreover, Austin entered with just 16 total touches (eight carries, eight receptions) and 99 total yards in the first three weeks, so it’s hard to expect Sunday’s volume on a week-to-week basis. Throw in Nick Foles at quarterback, and inconsistency will likely be the story in the future.

As such, Austin isn’t worth using a high waiver priority just yet.

That said, he’s an intriguing player to keep an eye on. Austin, who is still only 24 years old, can line up all over the field and has some of the most exciting quickness and elusiveness in the league. Sure, he was bad his first two seasons, but it’s entirely possible that he’s finally figuring it out.

If you have an open bench spot or are in a deep league, it’s certainly worth it to stash Austin, as long as it doesn’t cost you anything. Again, the odds that he becomes a consistent factor are still low, but with his tantalizing skill set, and with St. Louis’ desperate need for an offensive playmaker in the passing game, he makes for a high-upside option.