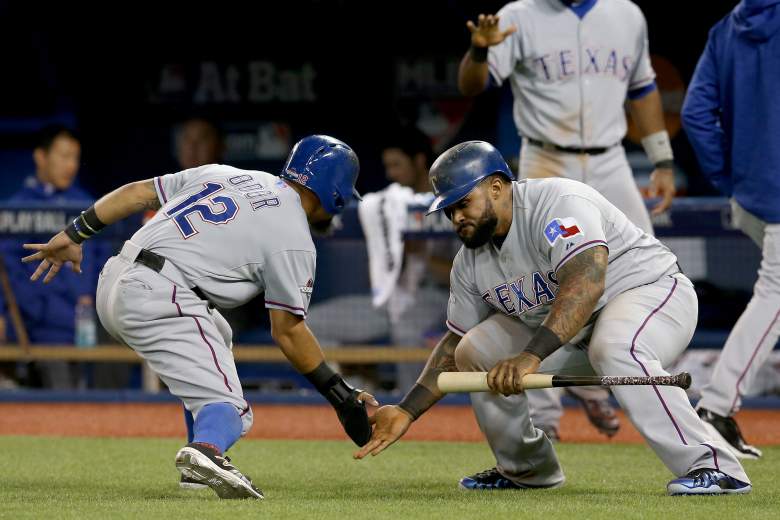 Rougned Odor and Prince Fielder celebrate in front of their dugout after taking the lead in the top of the seventh inning. (Getty)

So, that got weird fast.

It was a normal pitch, a normal catch by Toronto Blue Jays catcher Russell Martin. Then, Martin tried to throw the ball back. It hit off the bat of Texas Rangers batter Shin-Sho Choo. And Rougned Odor started running.

The home base umpire appeared to call time on the field but after a bit of debate, it was ruled that Odor’s run was well within the rule books. Check out the play right here:

So, how exactly was Odor safe? Simply put, it was a bad throw by Martin, who was charged an error for the play. Choo was still in the batters box when the Jays catcher tried to make the return throw and clearly did not try to make any movement that would lead to an interference call. You can read up on the complete rules for batters here, but this is the main jist of the call as to why the play was live when it hit off of Choo’s bat:

It took nearly 20 minutes for umpires to determine that the ball was live – and there was even a short review of the play – but the call stood, giving the Rangers a 3-2 lead and the fans in Toronto collectively lost their minds.

Canada goes bonkers after umps rule Odor safe on wild throw back to the pitcher so they threw beer into the OF. pic.twitter.com/fOpE0VhvdX

According to reports on Twitter, the Blue Jays fans even refused to sing “Take Me Out to the Ballgame” during the seventh inning stretch. The game is now being played under protest.