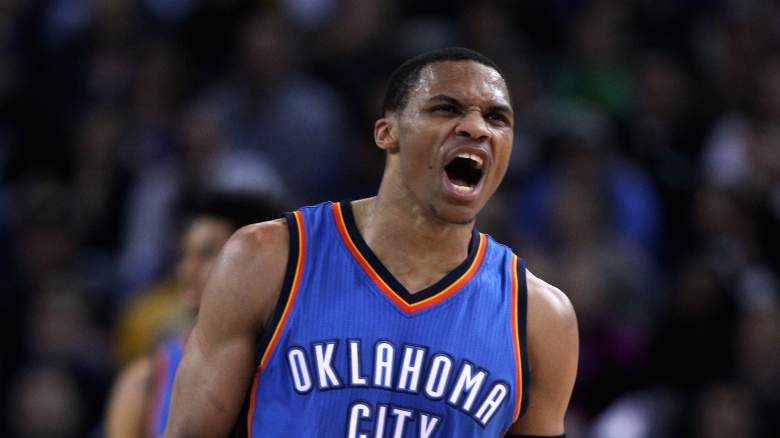 The Orlando Magic thought they had held off the Oklahoma City Thunder Thursday night when Victor Oladipo drilled a late step-back three, but then Russell Westbrook did this to force overtime:

Of course, there was plenty of wild action in the seconds immediately preceding Westbrook’s dagger. With the Thunder trailing 114-111 with under 15 seconds to go, Kevin Durant did Kevin Durant things:

Then Oladipo, who had made just one of his first seven three-point attempts, appeared to steal one from Oklahoma City with just four seconds remaining:

The roller-coaster continued with Westbrook’s unbelievable shot, which capped an 18-point fourth-quarter comeback for the Thunder.

But it certainly didn’t stop there. The electrifying point guard scored all nine points for the Thunder in the extra period and appeared to have secured a win for his team, then Oladipo hit another massive trey, this time at the buzzer to force a second overtime:

Victor Oladipo knocks down ANOTHER clutch three at the end of OT to force a second OT! https://t.co/oTt3e0Qzer

Westbrook and Durant dominated the second OT period, propelling the Thunder to a wild 139-136 victory. Westbrook finished with 48 points, 11 rebounds and eight assists, while Durant had a meager 43 points and 12 rebounds.

Oladipo notched the first triple-double of the young season with 21 points, 13 rebounds and 10 dimes.

Read More
Basketball, NBA, Oklahoma City Thunder
A barrage of 3-pointers at the end of regulation between the Thunder and Magic was capped by a 40-footer from Russell Westbrook to force OT.