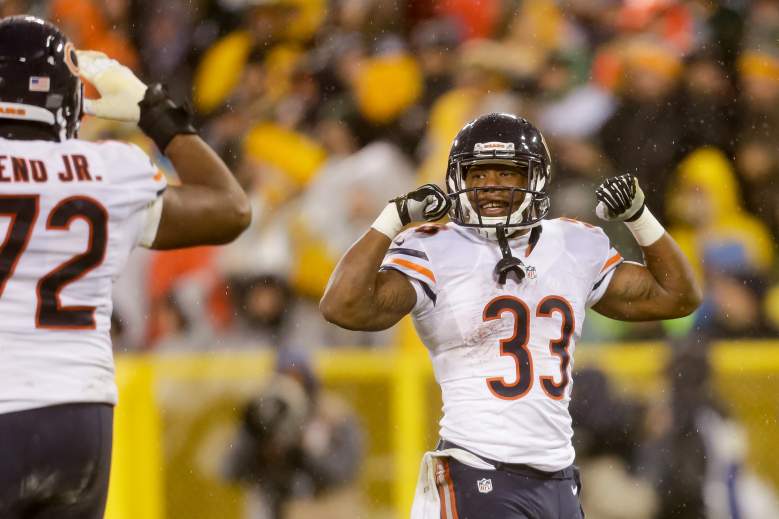 The Chicago Bears came into Lambeau Field on Thursday night as substantial underdogs. They walked off as winners.

Despite flags and rain and a handful of miscues, the Bears defense held on fourth and goal to keep Aaron Rodgers and the Packers out of the end zone in the waning moments of regulation.

It was a less-than-ideal night for the Packers as Rodgers took a nasty hit on a botched snap in the third quarter and even appeared to be injured before heading back into the game on the ensuing drive. The Green Bay quarterback finished 22-for-43 for 202 yards, one touchdown and one interception.

Meanwhile, Jay Cutler, notching his first win in Green Bay, completed 19 of 31 passes for 20 yards and one touchdown. Jeremy Langford also chipped in a touchdown of his own.

Click here to check out a full box score of the game and read on for all the night’s best highlights:

Jeremy Langford Continues to Be Good at Running the Football

Jeremy Langford may be splitting carries with Matt Forte now, but the Chicago Bears running back is still getting his touchdowns – including a late push into the end zone in the waning moments of the second quarter.

Here’s how it played out:

The run, capping off seven-play, 58-yard Chicago drive, put the Bears up by four.

Jay Cutler Almost Fell Over – Then He Threw a Touchdown

After Eddie Lacy coughed up the ball on the Packers drive, the Chicago Bears took over with solid field position and a big-time need to get on the board. Jay Cutler made sure they didn’t disappoint.

The Bears quarterback tripped a bit at the line of scrimmage (it’s raining a lot) but managed to stay on his feet to find a wide-open Zach Miller in the corner of the end zone.

All tied up at seven midway through the second quarter.

Eddie Lacy Got the Packers on the Board First

After the two teams exchanged drives early in the first quarter, Aaron Rodgers found Eddie Lacy on a short pass into the end zone. Check it out:

There was a bit of controversy with the play as officials mulled over Lacy’s dash into the end zone. He did dropt hat ball pretty quickly. You guys be the scoring-judge. As an added bonus, the throw was Rodgers’ 250th touchdown toss of his career.

The Green Bay Packers should probably win this game.

It’s Thursday night in primetime, the team is honoring Brett Favre by retiring his number at halftime and the Chicago bears are pretty beat up. After a return to form with a convincing victory against the Minnesota Vikings last week, the Packers need to keep riding that momentum.

That means Aaron Rodgers has to be on his a-game and the Green Bay offensive line needs to give him a chance to be. But, more importantly, the Packers defense needs to be on point.

Sure, Jay Cutler didn’t throw for a touchdown last week, but coming into that Week 11 loss, the Bears quarterback had been on a pretty consistent roll. Add into the mix the projected return of Matt Forte in the Chicago backfield and the Bears suddenly present a pretty powerful two-headed rushing monster.

This is certainly one game to be thankful for.

Jay Cutler’s Family: The Pictures You Need to See