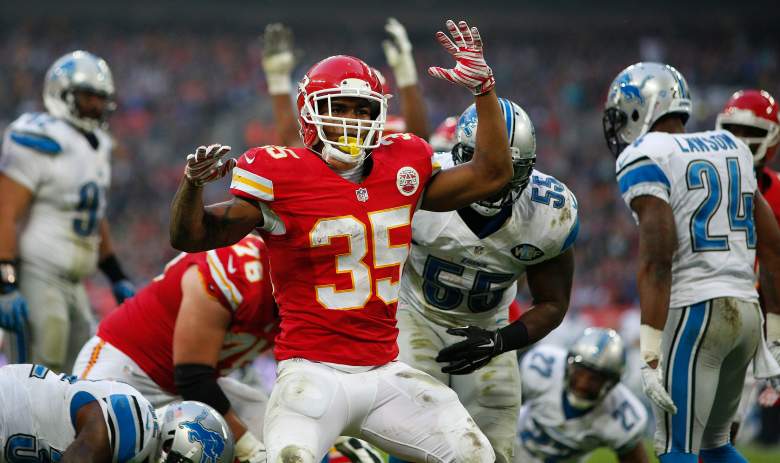 The Chiefs dominated the Lions in London. (Getty)

The Kansas City Chiefs might want to start playing in London every week. The Chiefs defeated the Lions 45-10 in the early kickoff from Wembley Stadium.

Alex Smith showed some agility on the ground. Smith had five rushes for 78 yards and a touchdown. He also threw for 145 yards and two touchdowns. Chacandrick West had 20 rushes for 97 yards and one touchdown.

Matthew Stafford continued his struggles. Stafford was 22-of-36 for 217 yards, one touchdown and two interceptions. The Lions offensive line continued to fail to provide Stafford with protection.

With two straight wins, the Chiefs are beginning to build momentum while the Lions season appears to be over.

Here is how the Chiefs came up with the win in London:

De'Anthony Thomas might be the fastest player on the field. This one wasn't even close. TOUCHDOWN. #DETvsKC #NFLUK https://t.co/MKOSEtuE6y

De’Anthony Thomas took the handoff on an end around play. Thomas provided the first touchdown of the game by either team and gave the Chiefs a 7-3 lead.

Smith broke off this long run and would later run it into the endzone. Smith scored on a 12-yard run. He had 3 rushes for 69 yards midway through the second quarter.

Matt Stafford throws another interception with only 6:19 left to play in the half.

Stafford had two early picks. Justin Houston got the second interception for the Chiefs. The Lions offensive line continued to struggle to provide protection.

Charcandrick West up the middle.. TOUCHDOWN! 24-3 @chiefs. 3:31 left in the 1st half. #DETvsKC #NFLUK pic.twitter.com/1ZbWPbFETf

West had a short run up the middle for a touchdown late in the second quarter. West’s touchdown gave the Chiefs a 24-7 lead. It was all Chiefs early on in London.

Travis Kelce Put the Game Away

Early in the third quarter, Smith found tight end Travis Kelce for a touchdown. Kelce gave the Chiefs a 31-3 lead. The route was on at Wembley Stadium

The Lions Finally Scored a Touchdown

After a difficult day, Matthew Stafford found Lance Moore for the Lions first touchdown. Moore caught the ball short of the goalline and fell to the ground. However, he was untouched and was able to roll into the endzone for the score.