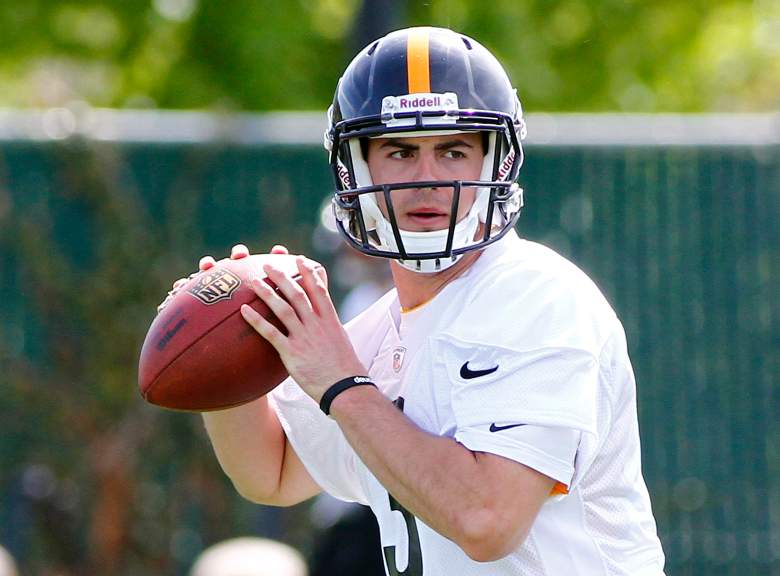 Landry Jones is back in the Steelers spotlight after the injury bug struck the squad again on Sunday. (Getty)

Ben Roethlisberger left Sunday afternoon’s game against the Oakland Raiders with an apparent ankle injury after he was sacked by defensive end Aldon Smith late in the fourth quarter. The veteran QB, who has battled injuries all season, hobbled off the field with assistance from teammates before being carted to the locker room.

Steelers QB Ben Roethlisberger is now leaving the sidelines on a cart. Suffered what looked like a left foot injury.

That means it’s Landry Jones time in Pittsburgh. According to reports, Roethlisberger left Heinz Field on Sunday to have his foot evaluated by medical personnel, so Steelers fans should probably brace themselves for a good amount of Jones in the next few weeks.

The quarterback had previously stepped in under center after Roethlisberger was injured earlier this season and fellow backup Geno Smith failed to impress. The former Oklahoma standout played in two games, completing 24 of 41 attempts for 377 yards and three touchdowns.

Those aren’t particularly bad numbers for a guy who game into the season as a third-string quarterback. After all, Landry has some serious receiving threats. Heath Miller is always dependable and this guy named Antonio Brown is rumored to be pretty good at playing football.

Pittsburgh won’t have Le’Veon Bell to a knee injury last week as well certainly doesn’t help the Steelers playoff hopes, but Jones is not an immediate death sentence.

The Steelers play at home against the Cleveland Browns next week, a team that is reeling in its own right. So, all together Pittsburgh fans, deep breaths.