UPDATE: The Seahawks have also re-signed Christine Michael, adding uncertainty to how the RB touches will be divided. Brown is still a player to own for his upside, but he’s not someone to start in Week 15 until there is more clarity on the situation. Denard Robinson and Tim Hightower are better RB pickups this week.


A week ago, Bryce Brown wasn’t on an NFL roster. Now, he’s going to be one of the highest priority adds in fantasy football.

That’s because the 24-year-old running back is suddenly in line for the bulk of the carries in what has been the hottest offense in football over the last month. Marshawn Lynch is still out. Thomas Rawls is done for the year. DuJuan Harris has been released. Fred Jackson will remain in his third-down role, per head coach Pete Carroll.

As a result, Brown, who was signed by the ‘Hawks after Rawls was injured Sunday, is in line for an easy 15-to-20 carries. Harris, in Rawls stead on Sunday, got 18 carries despite fumbling inside the 10 and being mostly terrible.

That potential volume, in an offense that has poured on 34.6 points per game since its Week 9 bye, makes him a must-own player for anyone still alive in their fantasy playoffs. The fact he gets to go up against the Cleveland Browns, who are 28th in the NFL in yards per carry allowed and 29th in Football Outsiders’ run defense rankings, in Week 15 just sweetens the deal.

Brown showed some big-play ability during his two seasons with Philly (4.6 yards per carry, six touchdowns), but he failed to do much in Buffalo in 2014 (3.5 yards per carry) and hasn’t been able to stay on a roster in 2015.

Still, he’s a talented player in an ideal situation for fantasy purposes.

Ultimately, I like Denard Robinson as the better pickup this week–T.J. Yeldon is dealing with a sprained knee, Shoelace looked great on Sunday, he has proven he can carry the load in this offense, and the Jaguars have two cake matchups (Atlanta Falcons and New Orleans Saints) in Weeks 15 and 16–but Brown is a very close second. 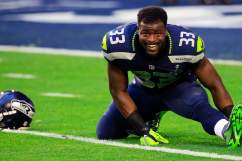 Read More
Football, NFL, Seattle Seahawks
Bryce Brown is suddenly the starter in Seattle. What does it mean for his fantasy outlook? And where should you target him on the waiver wire?