Woodson is finishing his career with the Raiders, where he spent the first 11 years of his career. (Getty)

As he prepares to play his final games in the NFL, it’s as good a time as ever to look back on the career of Charles Woodson. One of the most accomplished defensive backs in the history of football, Woodson announced 2015 will be his final season after the Raiders Week 15 loss to the Packers.

Despite 18 years in the NFL, Woodson isn’t the mega star that other big-name defensive players have become. That’s because with all his success, Woodson is a private man. He dedicates his time to his charity Charles Woodson Foundation, and spending time with his wife and two boys. In between, Woodson is also the co-owner of a winery.

Scroll to learn more about Woodson:

Charles led a wild life early in his career, but has matured and grown while in the NFL. (Facebook)

Charles is one of the game’s best pure athletes, and his age reflects that. He still has crazy speed and quickness, and his stats this year are as good as ever. He currently leads the Raiders with five interceptions, and is second on the team with 65 tackles.

Growing up in Fremont, Ohio, Woodson never thought of starring as a free safety. He was the best football player in Ohio in 1995, rushing for over 2,000 yards for Ross High. In an interview with a scouting magazine, a young Woodson was not shy about his abilities toting the rock.

“I’m awesome,” he told the publication. “I make people miss and I use my blockers.”

2. His Stats Rank Him Among Football’s Greatest Players

Woodson was taken as the fourth overall selection in the 1998 draft. (Getty)

Over 11 years with the Raiders and 7 with the Green Bay Packers, Woodson has accumlated some crazy statistical numbers.

The number that ensures his trip to Canton is 13. Woodson has 13 defensive touchdowns, more than anyone in NFL history. When asked about the meaning of the accomplishment, Woodson told reporters, “It says that I’m one of the greatest players to ever play this game.”

In total, Woodson had a career that any kid growing up would dream about. He currently ranks fifth all-time with 65 interceptions, and can be the sole owner of that position with one more pick. He and Marcus Allen are the only two men to ever win a Heisman Trophy, AP Rookie of the Year, AP Player of the Year, and a Super Bowl in the same career.

Woodson is currently playing out a $1.8 million contract in Oakland, but has signed several large deals in his career. His rookie contract earned him over $2 million per season, and his deal in Green Bay was for seven seasons and had a maximum potential of $52 million. Woodson made about $28 million in salary in Green Bay, most of it in the early years of his contract. TheRichest.com estimates his net worth at $15 million, but after his recent stint in Oakland it’s likely closer to $17 million. 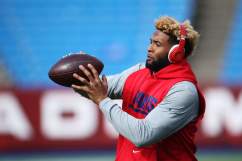 Woodson’s move to Green Bay allowed him to slow down, raise a family, and dedicate more focus to football. (Facebook)

After being drafted fourth overall by the Oakland Raiders, Woodson was “living life at 100 miles per hour.” That life was not without controversy, and Woodson damaged his reputation over his first eight years in the NFL. He was arrested for DUI in 2000, and again in 2004 after refusing to exit a woman’s car. He was suspended for missing curfew, and was notorious for dozing off in meetings.

The big change came in 2006, when Woodson decided to test free agency. He wasn’t exactly highly sought after, and eventually signed with the Packers. There, was a smaller neighborhood and bigger emphasis on football, Woodson turned his life around. Rod Woodson, who played with Woodson in Oakland, spoke about his growth both on and off the field.

“He needed to kind of get through adolescence, so to speak, while was with the Raiders,” Woodson says. “After he got to Green Bay, he finally matured. He matured outside of football. Before players mature on the field, they have to mature outside the field and I think he did that first, and then his play level just increased and he even got better.”

In 2009, Woodson made a $2 million donation to C.S Mott Children’s Hospital, which is run through the University of Michigan. He also founded the Charles Woodson Foundation, which funds scholarships for incoming kinesiology students, and research for studies on childhood obesity, diabetes, and other ailments concerning children. For more information about the foundation, click here.

4. He Was the Last Player to Win the Heisman Trophy That Wasn’t a Running Back or Quarterback

After tearing it up as a high school running back, Woodson had his choice of colleges. Michigan was his dream school, and it didn’t take long for him to make an impact. In transitioning to defensive back, Woodson won a starting spot in hid first two weeks of training camp. He led the team his freshman season with five interceptions, and was named Big Ten Freshman of the Year.

The following season, Woodson began to experiment with the offensive side of the ball. That season he led the team with 15 pass breakups, and also totaled over 300 yards of offense on 13 catches and six carries. He was named First Team All-American and was a finalist for the Jim Thorpe award.

Woodson’s junior season didn’t just bring individual accolades, but team success as well. The 1997 Wolverines went undefeated, and defeated Washington State in the Rose Bowl to claim a share of the national title. Woodson was an impact on all three phases of the game. He had seven interceptions, 11 catches for 231 yards and a touchdown, and was a dangerous punt returner. That combination led him to win the Heisman over Peyton Manning, a feat that hasn’t been accomplished since. 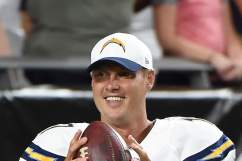 How Many Children Does Phillip Rivers Have?

Chase and Charles Jr. aren’t quite old enough for football, but are rabid fans of the Oakland Raiders and Golden State Warriors. (Facebook)

Woodson’s been in the NFL for so long, he can do something no current players can do: run a vineyard. The NFL doesn’t allow players to endorse alcohol, but that policy was enacted under Roger Goodell’s regime. Charles Woodson Wines has existed since 2001, when Woodson and collaborator Rick Ruiz produced their first merlot to be used as donation bottles.

It’s a small company, but the wine is available for sale at CharlesWoodsonWines.com. The website opens with a statement from Woodson, which reads:

“Charles Woodson Wines is an endeavor that, like its proprietor, came from humble beginnings and evolved into so much more. Blended from grapes that were cultivated in one of the most exclusive vineyards in the Napa Valley, Charles Woodson Wines embodies the abundant blessings that surround us. This is a wine of pure enjoyment, gratitude, giving back, and paying forward. From our cellar to yours, we hope you enjoy.”

Woodson’s been interested in wine since 1998, when he attended Raiders training camp in Napa. After a little exploring on the subject he met Rick Ruiz, who at the time was working with industry giant Robert Mondavi. The project started as a way to supplement charity efforts, as items that Charles could use to donate to events for fundraising. Today the company makes two wines: a cabernet sauvignon and a cabernet franc. They have only been selling to the public since 2008, and are considering adding more products in the future.

Read More
Football, Las Vegas Raiders, NFL
Charles Woodson is getting ready to hang up his pads, but he's got quite a busy life ahead of him. Woodson stays busy with family, charity work, and his winery.