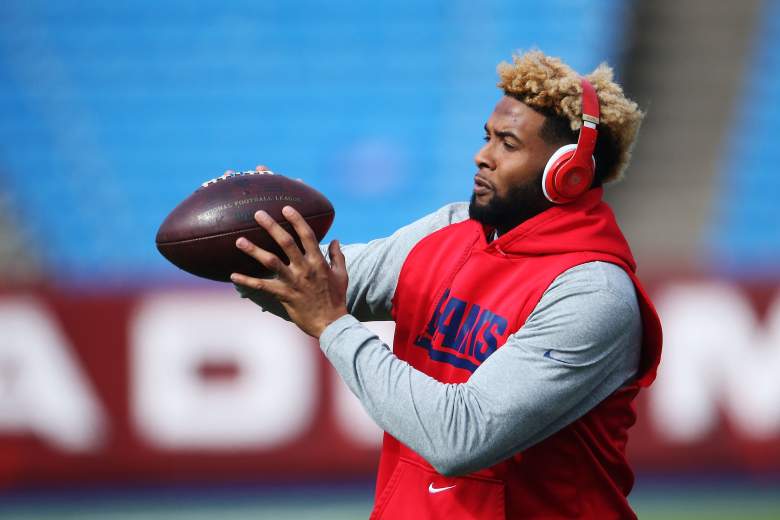 Reports have now broke that Odell Beckham Jr. was provoked on Sunday afternoon, leading to his three personal fouls. (Getty)

Odell Beckham Jr. has been suspended one game his repeated targeting of cornerback Josh Norman during a December 20 game against the Carolina Panthers.

But while Beckham’s on-field actions were eye-opening, the Pro Bowl wideout was the subject of even more attention the following day, when reports emerged that he was provoked by anti-gay slurs from Panthers players during pregame warmups.

The Giants also believe that Beckham was provoked by the pre-game taunts:

“Why would our guy say they used that language unless they did?” Giants spokesperson Pat Hanlon told Outsports. “The claim serves no purpose other than the truth.”

OutSports reported that the Giants were also hosting a group of LGBT youth during the game as part of the team’s work with the You Can Play project and the Hetrick-Martin Institute. New York has a history of supporting the LGBT community and groups. Joan Tisch worked with gay men with AIDS in the 80s and GMHS (formerly Gay Men’s Health Crisis) is located in the Tisch Building. Now Tisch’s son, Steven, has been a vocal supporter of same-sex marriage for years.

Norman and fellow Panthers cornerback Cortland Finnegan took some digs at Beckham after the game.

Finnegan told reporters postgame, “Maybe it’s in his blood. Maybe it’s female-related,” while Norman said, “You’re going to be Michael Jackson and go around and dancing and playing and a lot of other stuff and not be a football player and not train the way you’re supposed to train. It goes to show. I hope I pulled that mask off. I pulled back the face of what that dude really is.”

To be clear, didn't take the Finnegan comment as a shot toward woman. More like, "maybe he's having problems w/his girlfriend."

The New York Daily News reported that, according to Hall of Fame Dallas Cowboys wideout Michael Irvin, who is close to Beckham, Beckham has been the target of anti-gay slurs throughout the course of the season.

He deals with it a lot. For some reason, everybody goes after him with gay slurs. He’s a different kind of dude. He has the hairdo out, he’s not the big muscular kind of dude. The ladies all love him. He’s a star. I wonder why people are going in that direction. It blows my mind. I told him he can’t let stuff that people say get to you.

So why is Beckham frequently the target of those kind of slurs? Here’s some background:

All of the Reports About Beckham’s Love Life Have Involved Women; There’s No Evidence That He’s Gay

While Beckham’s off-the-field life has mostly stayed out of the headlines, there’s not a shred of evidence that he’s gay. In fact, the few times that he’s made it onto the gossip pages, the subject has been rumored relationships with women.

Earlier this year, rumors swirled that Beckham was in the “early stages of dating” model Amber Rose. The two were spotted out together in New York several times, but haven’t been seen since the season started.

In 2014, the New York Daily News reported that a woman named Erica Medez claimed to be Beckham’s fiancee and the mother of his child. “The entire story is fabricated,” Beckham said at the time. “I have never been engaged. I don’t have any children. And I have never met this person who is making these claims.”

Wade Davis, The Leader of the You Can Play Project, Says Beckham Is a Target Because He ‘Doesn’t Conform With Society’s Standard Definition of Masculinity’

Wade Davis, an openly gay former NFL cornerback who serves as executive director of the You Can Play Project and counsels NFL players, coaches and executives on LGBT issues, said Beckham is likely a target of anti-gay slurs because he doesn’t conform with society’s standard definition of masculinity.

“The way he shows up in the world doesn’t fit into that small box that most men are comfortable playing in,” Davis told Heavy, referring to Beckham’s blond hair and atypical fashion sense. “They do anything that’s outside of the norm, the first thing that people do is question their sexuality.”

Davis, who worked with Beckham and the rest of the Giants during a training session in 2014, said the criticism directed at Beckham is similar to that directed at Young Thug, a rapper who frequently wears women’s clothing.

“We have to expand the box around what is a man, what is manhood and what is masculinity,” Davis said. “I think why someone would call Odell gay is because he’s expanding that box. Right now, the millennial generation, they’re just a little bit different. The rapper Young Thug gets so much heat for wearing women’s clothing. No one likes that because it’s uncomfortable.”

In many ways, the sports world has been slower to embrace LGBT people than the rest of society, but a lot has changed for the better over the past several years. In 2013, NBA center Jason Collins became the first active player in any of the major North American male team sports to come out as gay. In 2014, defensive end Michael Sam became the first openly gay player taken in the NFL draft and the first to appear in preseason play. The St. Louis Rams, who drafted Sam in the seventh round of the 2014 draft, cut him before the start of the regular season. He played one game for the Montreal Alouettes in 2015 before leaving the team for personal reasons.

Davis says there are “players in multiple sports leagues” who are out to their teammates, but have not talked about their sexuality publicly because of concerns over the media firestorms that would likely follow.

“Most players who I talk to, one of the reasons they won’t come out is the media,” Davis said. “The locker room is one of the few safe spaces they have. Athletes protect each other. … I’ve never had a guy say he’s had any problems (coming out to his teammates). He just needed to tell them. Didn’t need to tell the rest of the world. There’s some respect there.”

One of Davis’ biggest hopes: That in the next 10 to 15 years, it will become far more common for gay athletes to come out earlier in their careers, perhaps coming out when they’re still in high school, then entering college and the pros having been out for years, eliminating the need for a public announcement once they’ve turned pro.

News about the slurs directed at Beckham came out after reports broke December 21 that Beckham and Panthers practice squad player Marcus Ball had a brief sideline exchange. Carolina players were also spotted on the sidelines holding a baseball bat, an item the team regularly uses during pre-game routines as a means of pumping each other up and symbolizing “big plays.”

You can see the bat in this video:

What is a Panthers practice squad player doing going into the Giants team stretching area.. with a baseball bat? pic.twitter.com/4mIQ0jwYRg

Giants punter Brad Wing spoke to the media December 23 and said that a Panthers player in street clothes, identified in the video as Ball, holding a bat approached Beckham on the New York side of the field during warmups. Wing said Beckham tried to shake the player’s hand, but he refused. Wing said Beckham asked, “Why aren’t you playing?” and Ball responded, “I’ll be the reason you don’t play, today or ever again.”

Panthers coach Ron Rivera addressed both the bat and the reports of possible anti-gay slurs during a press conference on December 22, calling both part of a “soap opera” and said he hasn’t seen any “concrete” evidence to believe his players did anything wrong. He added that Carolina would no longer bring the bat onto the field:

Because I’ll hear it if I don’t [end it]. That’s the truth of the matter. I’m going to end up hearing it, so to avoid the set of circumstances let’s just eliminate it. That’s what we’re going to do. [The NFL], it’s the ‘No Fun League’ for a reason.

There’s not a shred of evidence to suggest Beckahm is gay. But the Panthers’ alleged insinuation raised more than just a few eyebrows and has prompted calls for an investigation into Carolina players’ conduct.

Julie Muller, commissioner of the North Atlantic Conference (NAC), which works with the You Can Play Project to improve inclusion and acceptance of gay student-athletes told the SportingNews that the league should look into the incident.

“As far as we’ve come, there are still issues of heterosexism and homophobia that are present in all levels of sports — but certainly in the NFL,” she told the magazine. “Any time there are allegations like this they should be investigated, because that kind of behavior is not appropriate. It may not justify Beckham’s response. But it certainly is something that should be addressed by the leadership if they are, in fact, accurate.”

Giants coach Tom Coughlin talked to the media December 21, saying he wouldn’t defend Beckham’s actions on the field, but that he “will defend the young man and the quality of the person. I will defend him as long as I am able.”

Beckham’s suspension was upheld after he filed an appeal and he will not be with the Giants when they play the Minnesota Vikings on Sunday night. He was whistled for three personal fouls in the Week 15 matchup, including one flag for this helmet-to-helmet hit against Norman:

Beckham took to Twitter to apologize for his actions on Sunday:

To learn more about Beckham and his family, click here:

For more information on Beckham’s one-game suspension following Sunday’s game, as well as his intention to appeal the decision, click here: 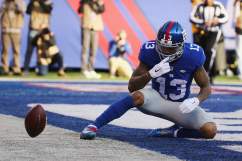 Will Odell Beckham Jr. Be Suspended by the NFL?