Christian McCaffrey helped lead Stanford to a Pac-12 championship and his play earned him a trip to New York City as a finalists for the Heisman Trophy. McCaffrey is one of the most unique players in college football.

His standard position is running back but is used by Stanford in a variety of ways. In addition to being heavily involved in the passing game, McCaffrey also returns kicks and punts making him one of the most exciting players for college football fans to watch.

Here is what you need to know about Christian McCaffrey:

During the Pac-12 championship game, McCaffrey broke Barry Sanders record for all-purpose yards. His 3,276 yards broke Sanders’ record of 3,250 yards in one season. The record had previously stood for over two decades.

His son, Barry J Sanders, is a teammate of McCaffrey on Stanford. McCaffrey has shown a unique ability to get involved in the passing, running and return game for the Cardinal.

McCaffrey showed a lot of swag as a kid. The Denver Broncos tweeted out this video of a young McCaffrey. It is footage of game between children and mascots.

McCaffrey strolled into the endzone for a touchdown. He reached into his sock and grabbed a sharpie. The video zooms in on him pretending to sign the ball before he throws it into the stands.

3. He Comes From an Athletic Pedigree Including a Dad that Played in the NFL

Ed McCaffrey, Christian’s father, was an all-pro wide receiver for the Denver Broncos. His athletic genes go much farther than his father. His mother, Lisa, played soccer at Stanford.

Christian’s grandfather, David Sime, was a great Olympic sprinter who won the silver medal in the 1960 Olympics in the 100-meter dash. His uncle, Billy McCaffrey, played college basketball for both Duke and Vanderbilt. It is difficult to find someone in Christian’s family who is not athletically inclined. 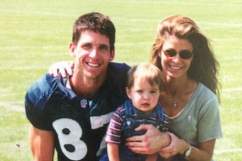 4. McCaffrey Had the Performance of the 2015 College Football Season in the Pac-12 Title Game

McCaffrey had his “Heisman moment” at the end of the Stanford season in the Cardinal’s biggest game of the season. He had 461 total yards. McCaffrey performed one of the hardest things to accomplish in football by having a receiving, passing and rushing touchdown in the same game.

He had 32 carries for 207 yards and one touchdown as well as four receptions for 105 yards and a receiving touchdown. McCaffrey also had 149 return yards and threw an 11-yard touchdown pass.

5. He Had Moves in High School but Was Not Heavily Recruited

While Yahoo Sports lists a number of offers for McCaffrey coming out of high school, most schools did not recruit him at running back. Often times, schools recruited him as an “athlete” and did not have a clearly defined role for him. He spoke about this to Fox Sports:

“A lot of times I got confused for a kicker. And I’ve been compared to every white player in the NFL,” McCaffrey said. Stanford fans are happy that McCaffrey chose to go to Stanford.

Read More
College Football, Football
Christian McCaffrey's play on the field made him a Heisman Trophy Finalists but there is much more to learn about McCaffrey. Get to know the dynamic playmaker.