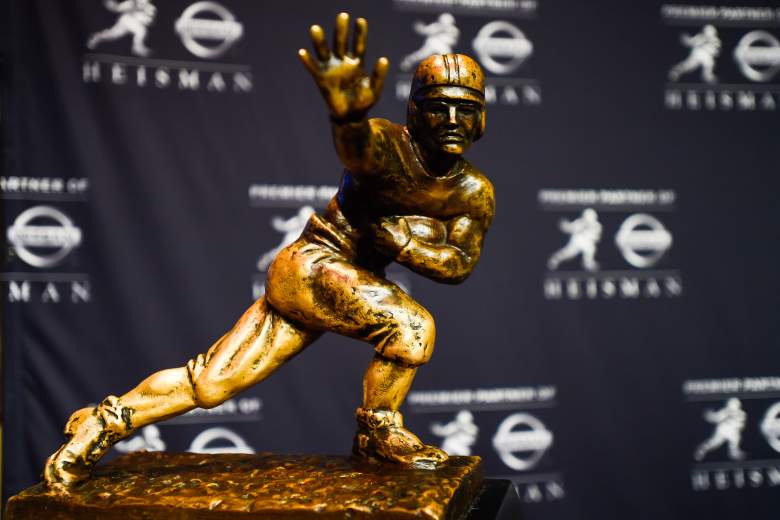 The Heisman Trophy will be awarded to one of three finalists during a broadcast on ESPN on Saturday night. (Getty)

Three Heisman Trophy finalists have descended on New York City, but only one college football standout will be able to hoist the award above his head and join a long line of gridiron stars on Saturday night.

Alabama’s Derrick Henry, Stanford’s Christian McCaffrey and Clemson’s Deshaun Watson are all vying for the honor.

Read on for all the info on how to watch the ceremony, as well as a breakdown of the three finalists and the odds outlook for each player.

Line: As of December 8, the odds for each of the three finalists were, via OddsShark, as follows:
Derrick Henry: -1200
Deshaun Watson: +2200
Christian McCaffrey: +600

Ceremony Preview: In a college football year that was jam-packed with standouts the Heisman voting has selected just three finalists for one of the most prestigious awards in all of sports. Let’s break them down.

Alabama running back Derrick Henry is the odds-on favorite to hear his name called on Saturday night, particularly after he wrapped up the year by breaking Herschel Walker’s SEC rushing record. Henry finished the year with 1,986 yards and a national-leading 23 rushing touchdowns on the ground. He racked up at least 20 carries in nine games and in those games recorded at least 120 yards, including a 189-yard performance on the SEC championship.

Not to be outdone, Stanford running back Christian McCaffrey broke Barry Sanders’ 30-year-old record for all-purpose yards in a season this fall. His best performance of the year came on one of the biggest stages as he racked up 207 rushing yards, 105 receiving yards and 461 all-purpose yards in the Pac-12 title game. That’s the fifth-most ever in a single season. Last but not least, McCaffrey’s 3,496 all-purpose yards are 1,000 more than anyone else has this season.

Clemson has been one of the most dangerous teams in the country all season and leading that offensive charge has been quarterback Deshaun Watson. The dual-threat finished the regular season with 3,512 passing yards and 30 touchdowns as well as 887 yards and 11 touchdowns on the ground.