The No. 4 Oklahoma Sooners take on the No. 1 Clemson Tigers in the Orange Bowl in Miami. The winner will advance to the College Football Playoff national championship game.

The Tigers are undefeated at 13-0 while the Sooners are 11-1. Oklahoma has won seven straight games since their loss to Texas and this matchup features two of the hottest teams in college football.

Vegas has Oklahoma as a slight three-point favorite and on paper the teams looks virtually even. The over-under is set at 63.5 points.

Heavy is picking Clemson and will outline why the Tigers should pull out a narrow victory.

The F+ Ratings have Clemson second and Oklahoma third in the computer rankings. The deciding factor in picking the outcome of the game is the quarterback position.

Oklahoma’s Baker Mayfield and Clemson’s DeShaun Watson are two of the best quarterbacks in the country. Mayfield offers more of a threat with his legs but Watson is the more prolific passer.

We see Oklahoma’s defense having an inability to slow down Watson and running back Wayne Gallman will be an x-factor just as he was in the ACC championship game.

If Oklahoma comes away with the victory, it will mean the Clemson defense was unable to stop the playmaking ability of Baker Mayfield. The Tigers defense is susceptible to big plays.

Heavy does not see the game playing out that way. Clemson has been the more consistent team for the duration of the season while Oklahoma waited until the second half of the season to come on strong.

The Tigers have somehow managed to come into this game as the underdog despite being the only undefeated team in the nation. This plays to the advantage of Dabo Swinney’s team who love to play with a chip on their shoulder.

Clemson will advance to play the winner of the Cotton Bowl between Michigan State and Alabama. 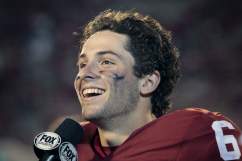