Luke Rockhold was already a Strikeforce champion, and now he can add UFC Middleweight title to his resume.

The 31-year-old handed Chris Weidman his first professional MMA defeat Saturday night at the MGM Grand, finishing the now-former champ with a fourth-round TKO. You can watch video of the finish above, but it really started much earlier in the fight

Rockhold controlled the majority of the way, and it seemed like he had it won in the third round when he mounted Weidman and delivered a flurry of punches and elbows that bloodied the champ, as you can see here:

Herb Dean, somewhat surprisingly, didn’t end the fight, allowing a dazed Weidman to survive the third round. But it didn’t matter, as Rockhold got him against the cage in the fourth and continued to fire away before Dean had to finally stop the contest.

The win marks Rockhold’s 12th UFC/Strikeforce finish, which, as Michael Carroll pointed out, is the most ever by a middleweight. 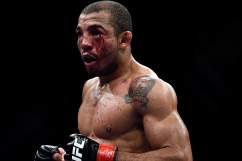