The Denver Broncos invited themselves to controversy tonight, when Peyton Manning finished out the team’s regular season finale against the Chargers. The Broncos offense was dismal before Manning came on, turning the ball over five times in less than three full quarters. In Manning’s first drive, he led the offense 80 yards for the go-ahead touchdown.

Sunday was Manning’s first appearance since Week 10, when poor play and a foot injury caused him to be subbed off for Brock Osweiler. When Manning was listed as the backup against the Chargers, it was his first backup role since his freshman year at Tennessee.

It was already weird having Manning in the reserve role, and it got weirder when he took the team down the field on their first drive. Because it’s Peyton Manning, it’s easy to forget how awful the Broncos offense was with him calling signals this season. Denver started 8-0 behind a strong defense, as Manning threw at least one interception in every start this season.

Osweiler started strong, but blew second-half leads to the Raiders and Steelers earlier this season. After coming from behind to defeat the Bengals last Monday, it appeared that Osweiler was the man for Denver moving forward.

After naming Manning the backup, Kubiak wasn’t shy about his logic behind the decision.

To find out who the Broncos will face in the postseason, click here. 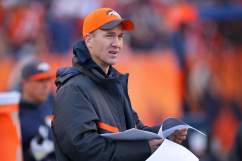