We are one week away from the Panthers meeting the Broncos in Super Bowl 50, but that hasn’t slowed down the betting action in Vegas. The Panthers’ impressive win in the NFC Championship has the line moving, with Denver’s defense looking to play spoiler for the second consecutive game.

Here’s the current odds for next Sunday’s meeting in Santa Clara:

Note: These are the opening odds, courtesy of OddsShark.com

Before the AFC Championship bets were pouring in for the Patriots, moving the line right up until kickoff. Then the sharps pounded Denver, taking the points and taking money in the process.

70% of bets on #Patriots … but the line is dropping, which means the BIGGER bets are backing #Broncos

As good as Carolina was against the Cardinals, the Denver defense will not get nearly enough credit heading into Sunday. According to OddsShark.com, the spread has increased by at least two points at most major betting sites. Denver’s moneyline is now as high as +200, a great bet for a defense that tore down the Patriots last Sunday.

Are we witnessing the same process two games in a row? All season Denver was undervalued, and they responded by going 5-0-1 against the spread as an underdog this season. 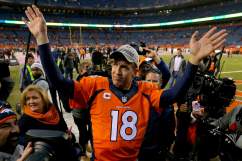