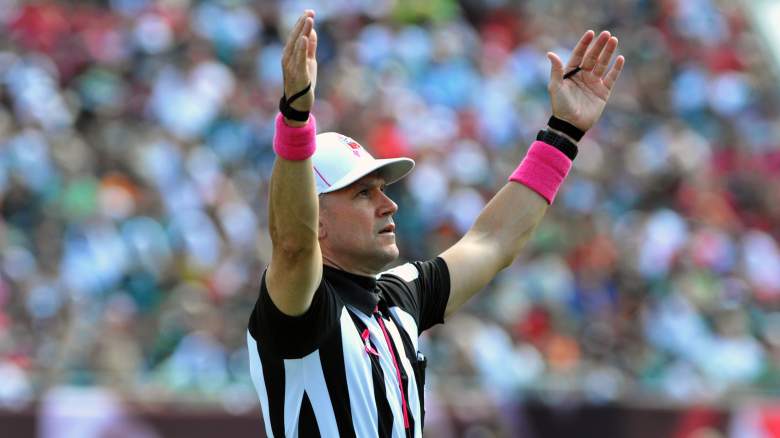 Clete Blakeman is relatively new to the scene.

Hired by the NFL in 2008, he became a head referee two years later and is now in his sixth season at the position. He has quickly become one of the more respected refs in the league, serving as the alternate for last year’s Super Bowl and now getting the call for this year’s Big Game.

For those interested, here’s a look at his complete history (not counting his two seasons as a field judge) with both the Denver Broncos and Carolina Panthers:

The numbers certainly look lopsided towards the Broncos, but five games is hardly a big enough sample size to draw any meaningful conclusions.

Blakeman hasn’t reffed any Broncos contests this season. The last one he did was in December of 2014, when Denver blew out the Oakland Raiders, 47-14. In that game, the Broncos were flagged one time for 16 yards, while the Raiders were penalized nine times for 86 yards.

As you may recall, one of Blakeman’s most infamous moments as a referee involved the Panthers.

On Monday Night Football in 2013, the Patriots, trailing Carolina by four points, were driving down the field in the final seconds. On the game’s final play, Tom Brady threw an interception in the end zone, but as Luke Kuechly bear-hugged Rob Gronkowski, flags flew.

It appeared the Pats were going to get one un-timed down from the one-yard line, but Blakeman picked up the flag and ended the game without an explanation. Memorably, Brady continued after Blakeman, yelling at him well into the tunnel:

2013 Patriots vs Panthers Final Play Brady F Bomb –Ill leave it to the internet geniuses to argue with each other over right or wrong. Ill just say its the consistently inconsistent officiating and enforcement from play to play, game to game that ruins the game. Since the transformation to a passing league, the referees have become the third team on the field2013-11-19T07:57:26.000Z

Read More
Football, NFL, Super Bowl, Super Bowl 2016
Clete Blakeman is the referee for Super Bowl 50. Check out his history with the Panthers and Broncos.