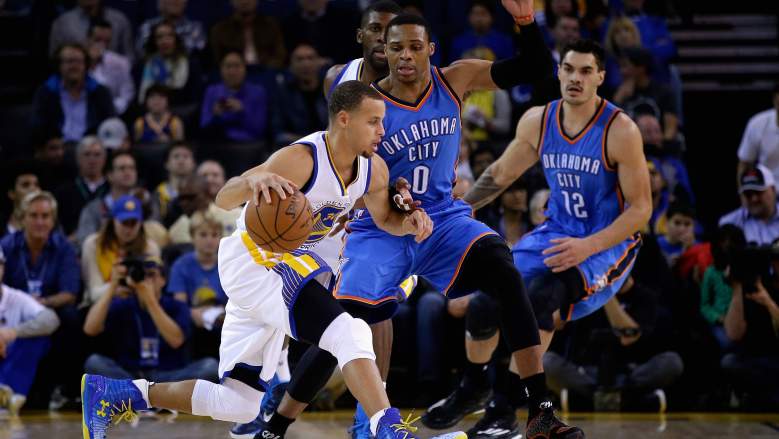 In what could be a preview of the Western Conference finals, the Warriors and Thunder meet in primetime Saturday night. (Getty)

The Golden State Warriors’ seven-game road trip comes to a close Saturday night with one of their most difficult tests of the season: a matchup against the Oklahoma City Thunder.

How the Dubs handle their remaining games against the Thunder and San Antonio Spurs will be crucial in their chase for 73, so even if this game may not have a large effect on the standings, it will likely prove important for other reasons.

Here’s a look at how to watch the battle of West giants:

Live Stream: ESPN3. You can click here for a full rundown of live stream options

It’s the point guard matchup dreams are made of. Steph Curry vs. Russell Westbrook. If it weren’t for Curry running away with the MVP award thanks to one of the more transcendent seasons in recent memory, Westbrook would probably be getting a lot more attention for the silly 24.3 points, 10.2 assists, 7.5 rebounds and 2.2 steals he’s averaging.

Curry, meanwhile, is averaging 30.4 points per game despite sitting out many a fourth quarter, and through 55 games, he’s only 10 three-pointers away from his own record set last year. In other words, these aren’t just the two best point guards in the league. They are two players in the midst of historically great seasons.

These two teams combined for 224 points in a thrilling contest that felt awfully similar to a postseason game a couple weeks ago, and this one figures to be more of the same. 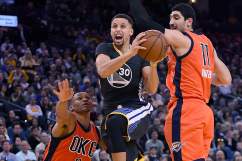 Warriors-Thunder Live Stream: How to Watch Online for Free