Von Miller had himself quite the game as he helped the Denver Broncos win Super Bowl 50. Miller finished with six tackles and 2.5 sacks.

Miller had a strip sack on Newton late in the fourth quarter and the Broncos recovered the ball near the endzone. Denver was able to punch in a late touchdown to seal the championship.

The Broncos selected Miller in the 2011 draft out of Texas A&M with the second overall pick. He was one pick behind Cam Newton, the quarterback he harassed in the Super Bowl. Aside from a suspension early in his career, Miller has had quite the season. Miller is slated to be a free agent this offseason, but the Broncos reportedly will attempt to place their franchise tag on him:

#Broncos have a choice for their franchise tag: Brock Osweiler or Von Miller. Sources says they'll tag Miller, then try to work out a deal.

Miller already had a great season with 11 sacks, but his five sacks in the final two postseason games gave him an amazing end to the season.

Here’s a look at one of many great plays from Miller:

Your #SB50 Most Valuable Player, 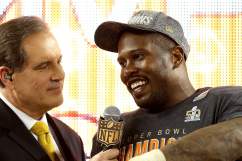