Just when you thought that the dabbing craze could not go any further this happened. The Stephen Colbert Late Show directly followed Super Bowl 50.

Colbert interviewed Super Bowl MVP Von Miller. Miller ended the interview by doing the dab. It was a backhanded shot at the dance that Cam Newton has made famous after touchdowns.

After Miller finished, he turned to Nantz to get him to the dance. Nantz is known for being stoic, but broke character for a brief moment to dab.

Miller had a lot to be excited about. He had a strip sack late in the fourth quarter that sealed the Broncos victory. Miller had five sacks in the Broncos final two postseason games.

Von Miller tells Stephen Colbert he's gotta dab on em, and gets Jim Nantz to do it pic.twitter.com/gW46ORhFRq

So Colbert and Von Miller just made Jim Nantz do the Dab. I think we can officially put that dance to rest now… 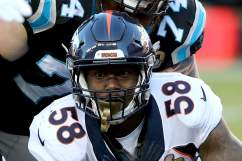