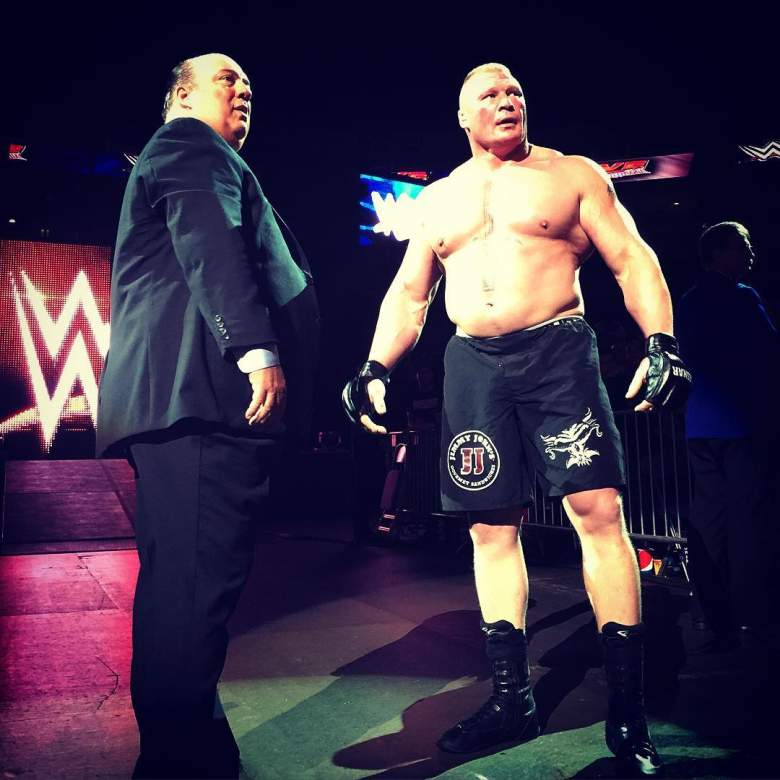 Brock Lesnar is at the center of all things Raw in Seattle tonight. (Instagram)

Read on for all the best moments and highlights from Monday night’s Raw in Seattle. Here we go:

Stephanie McMahon got things going by hyping up, once again, the Triple Threat at Fastlane. It doesn’t take long for her to be interrupted, however.

'I swear to God, before this night is over, I'm going to GET @BrockLesnar!!" – @TheDeanAmbrose #RAW pic.twitter.com/iH6JvG4xLa

Dean Ambrose and Roman Reigns make their way into the ring and are eventually joined by Brock Lesnar and Paul Heyman. The three Superstars all sign their name on the Fastlane contract and after a scuffle, Lesnar walks out of the ring having taken both Ambrose and Reigns down.

The first match of the night pits Kevin Owens and Dolph Ziggler against each other once again and the feud is still pretty raw in this one.

Ziggler gets the win after Owens misses a late-match cannonball, but KO isn’t willing to simply walk away. Instead, he throws a bit of a fit ringside. Owens tears up the announcer’s table and toss the steal steps. It’s all vaguely melodramatic.

@thefoxxyone is going to try her best to make @charlottewwe see red right now on #RAW!

The reigning WWE Divas Champion is back for another non-title match, facing off against Alicia Fox. Fox is fighting alone on Monday night after Brie Bella withdrew to spend time with her husband, Daniel Bryan.

In the end, this one is over before it really begins. Charlotte mocks Fox, Fox can’t get much control and Ric Flair does his usual “woooo” next to the ring.

Charlotte gets the win with the Figure Four into the Figure Eight. Wooooo.

Chris Jericho made an appearance on The Miz TV and, well, let’s just say the fans were not impressed. Jericho quickly lays the beat down on Miz, the fans chant “you look stupid” and the transition into a brand-new episode of The Highlight Reel is quick and rather abrupt.

The pair go back and forth for a few moments, with Jericho pointing out The Miz’s loss to AJ Styles and, as you’d expect, Styles appears.

Does @AJStylesOrg have what it takes to defeat @IAmJericho TWICE? We'll find out on #SmackDown THIS THURSDAY! #RAW https://t.co/9ZshQzARWI

The Miz uses the break to try and attack Jericho and it works for a second before Jericho and Styles face off. There isn’t a resolution, but we’ve been promised a rematch on Thursday night’s new episode of SmackDown.

Bray Wyatt & the Family Continue to Up the Creepy Factor

Bray Wyatt took down Ryback and his entire family was in on the action. The group continues to bring the ultimate creepy factor to the ring and their quiet, but threatening presence is still a major factor heading into Fastlane.

The fans in Seattle started to chant “feed me more” as Ryback charged with the Meathook, but Wyatt catches him in the Sister Abigail and notches yet another win.

After the match, The Wyatt Family continue to stalk Ryback in the ring and in the end he’s hit with yet another Sister Abigail. It’s not the best for Ryback and the fans boo the Family. As if you need more proof that these were villains.

Dean Ambrose Got His Chance at Brock Lesnar

…And it was kind of weird.

Amrbose threw a few more insults (including some, rather, personal barbs) Lesnar’s way, taunting The Beast for a few moments before Lesnar finally made an appearance.

It doesn’t take long for Lesnar to absolutely beat down.

He launches Amrbose into the barrier first, then scoops him up and hits him with an F5. Ambrose is laying in the middle of the ring and Lesnar stands might; then Roman Reigns appears.

Reigns stares down Lesnar, but Ambrose gets back up and well…he hits Lesnar in a less-than-ideal place. Roman Reigns laughs.

Alright, first things first. Mark Henry joined The New Day for their tag team match against The Usos and The Dudley Boyz. He wore a unicorn horn. That happened.

Then, things got crazy.

Both teams started to brawl before the official bell in their tables match and The New Day appeared to be in control early with Henry. But it doesn’t take long for some cracks in the recently-formed partnership and that’s about all it takes for The New Day to lose its footing.

Eventually, The Dudleyz put Big E through the table and notch the victory.

After the match, it appears Jimmy Uso is down due to an injury and while The Dudley Boyz appear to stand with their teammate at first, they turn on him quickly. The pair beat down on Jey and put him through the table as well,.

Oh boy, do we have WWE Raw spoilers for tonight.

According to multiple reports, Daniel Bryan was spotted flying to Seattle over the weekend and the rumor mill is running rampant that the star may be slated to make his return to the ring on Monday night.

There hasn’t been word yet as to what Bryan’s role in the event will be, particularly with his Twitter announcement that he’s retiring from the WWE, but fans are already anxious to see Bryan get back to his fighting ways. So, what else do we have in store for tonight’s new Raw? Don’t worry, we’ve got plenty of spoilers. Here we go:

Raw airs at 8 p.m. ET on USA Network. Make sure to check back here during the event for all the latest updates an highlights.

Read More
WWE, WWE Raw
There might be a big-time surprise in the ring on tonight's new episode of RAW and we've got all the pre-match spoilers right here.