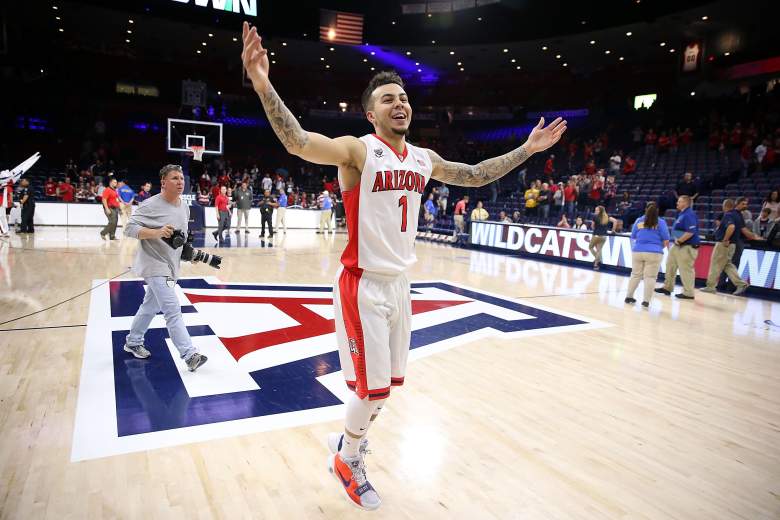 Arizona has faced plenty of expectations this season and that includes winning in the NCAA Tournament. (Getty)

The Shockers, who defeated Vanderbilt in the First Four on Tuesday night, and now get their reward; a matchup against Arizona in the Round of 64. Of course, this isn’t a typical 11 seed.

Wichita State boasts one of the best, and most experienced backcourts, in the entire NCAA Tournament bracket. Arizona, on the other hand, has been up and down throughout the regular season, before falling in OT to Oregon in the Pac 12 tournament.

This one is going to be good. Read on to check out a complete breakdown of the matchup as well as a look at the live stream info.

Game Preview: Ron Baker is not going to be intimidated by the NCAA Tournament stage.

If anything, the NCAA Tournament stage should probably be the one intimidated by him. The Wichita State senior leads the Shockers with 14.2 points per game and is rarely off the court, averaging 31.4 minutes. Oh, and did we mention he’s also the most experienced current player in the entire Tournament field.

No other active player has competed in as many Tournament games as Baker. And that’s saying something.

So, Baker won’t be nervous. Neither will the Shockers. This is, after all, their fifth straight season the squad has made the NCAA Tournament.

There is, however, a caveat to that.

Arizona will be just the second nationally ranked team Wichita State plays this season and the Wildcats are no joke. Arizona ranks 19th in the country with 81.2 points per game and 21 in the NCAA with 40.2 rebounds.

In other words, this one might be a heck of a lot closer than some of the other 6 vs. 11 matchups in our bracket this March.