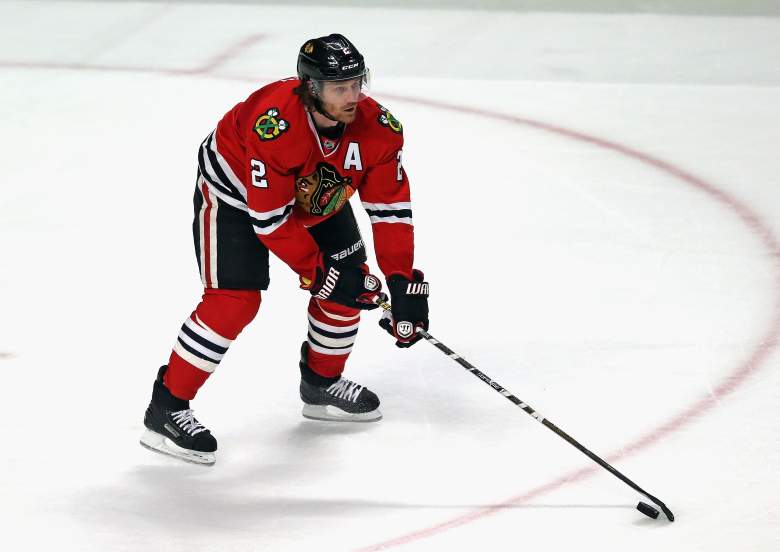 Duncan Keith may miss playoff time after a major hit during Monday night’s game against the Minnesota Wild. (Getty)

The Chicago Blackhawks dropped a 4-1 matchup against the Minnesota Wild on Tuesday night, but the reigning Stanley Cup champions may have lost even more than just a game.

The ‘Hawks may have also lost defenseman Duncan Keith; at least for the forseeable future.

Keith was involved in a vicious high stick on Minnesota center Charley Coyle and the general opinion of just about everyone who saw the move suggests it’s not if the Chicago star will be suspended, but for how long. And, more importantly, if Keith will be forced off the ice during the upcoming NHL playoffs. Check out the moment here:

The NHL announced on Wednesday that Keith had been offered an in-person hearing with the Department of Player Safety offices in New York. Keith was whistled for a match penalty for intent to injure.

So, what does this all mean for Keith’s possible playoff availability? Well, it’s not good.

The NHL only offers in-person hearings when a player can face a suspension of six or more games. In any other situation, the hearing is conducted over the phone. Chicago currently has five games left in the regular season, so any likely suspension would spill over into the postseason.

A source told the Chicago Tribune that the committee is expected to reach a decision before the Blackhawks play in Winnipeg on Friday. Coyle reacted fairly calmly to the hit, eventually returning to the ice and telling the Minneapolis Star-Tribune after the game:

No matter what happens in a game you shouldn’t swing your stick at someone’s face. I’m sure he wants to take that back. Heat of the moment thing. That’s how it happened.

The Hawks have already played a good chunk of their season without Keith on the ice. He missed 10 games after undergoing surgery to repair a torn meniscus in his right knee and Chicago went 5-4-1 over that stretch.

This is also not Keith’s first brush with suspensions. He was previously suspended during the Western Conference finals in 2013 for high-sticking Los Angeles’ Jeff Carter and missed five games for elbowing the Canucks’ Daniel Sedin in 2012.