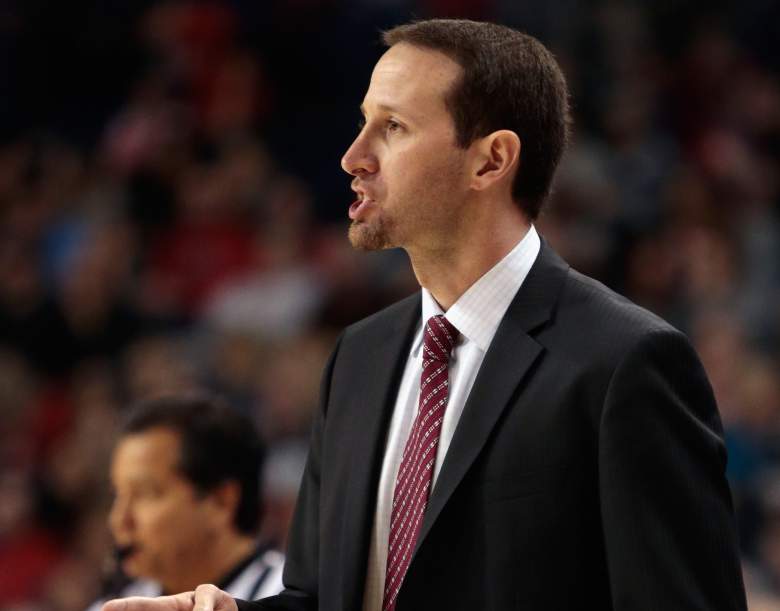 Ganot inherited a troubled Hawaii program this year and turned it all around in just one season. (Getty)

Not many other people are. But Ganot is. And so is his team.

The first-year Hawaii men’s hoops coach is more than confident heading into the NCAA Tournament, leading the Rainbow Warriors to their first berth in more than a decade. And he’s determined to make sure that this opportunity isn’t simply just a “happy to be here” moment.

After all, Ganot has turned this team around. The third head coach in two years, Ganot and the Rainbow Warriors recorded their best year on the court since the 2001-02 season and the 25 wins the team has recorded are the most by a rookie coach in Big West history.

So, Ganot is here to win. Ganot, and his players, are here to stage an upset. Read on to learn more about the first-year coach:

1. Ganot Was Hired During an NCAA Investigation Into the Program

Ganot has been a breath of fresh air for Hawaii this season. (Twitter)

Ganot has called Hawaii his “dream job,” but that job didn’t come with a bit of an asterisk when he was hired in April 2015.

Former coach Gib Arnold had been fired in October 2014, just weeks before the season was set to start, amid NCAA allegations that suggested the coach had acted “unethically and knowingly influenced others to provide false or misleading information regarding violations.”

Still, Ganot was not deterred from the position, telling ESPN:

Ganot signed a three-year contract with the Rainbow Warriors and Ka Leo reported the deal was worth approximately $200,000. The coach didn’t officially sign until October, however, and Ka Leo suggested the contract took so long becasue the school wanted to eliminate certain language after its settlement with Arnold.

Although it wasn’t an easy start, Ganot has more than earned that drawn out contract negotiation.

It isn’t just him either. Stefan Jankovic became the first Hawaii player in program history to earn Big West Player of the Year honors this season.

2. He Previously Worked as an Assistant at St. Mary’s & Hawaii

This isn’t Ganot’s first trip to Hawaii. In fact, before he was named the 21st head coach of the UH men’s basketball team, he was an assistant coach with the program from 2007 to 2010. He also served as the team’s Director of Basketball Operations for one year from 2006 to 2007.

In addition to his time with the Rainbow Warriors, Ganot worked as an assistant coach with St. Mary’s. He spent eight seasons, overall, with the Gaels, most recently from 2010 to 2015.

During Ganot’s five-year tenure as an assistant, SMC posted an 11-4 overall record and earned two regular-season WCC titles, appeared in the WCC Tournament championship game three times and claimed two league players of the year. Ganot did just about everything at St. Mary’s, coordinating film exchange and video breakdown and working one-on-one with players during practice. In 2006, during his first stint with the Gaels, Ganot received the program’s Mike Gibbons Volunteer of the Year Award.

Ganot surprised just about everyone, including his team and family, when he tied the knot in October 2015. When he was hired by Hawaii, just a few weeks earlier, Ganot had jokingly said he planned to put a proposal to then-girlfriend Barbea Duffy on hold.

According to Hawaii Warrior World, the two made things official in late October, announcing their marriage on social media. Ganot and Duffy, a Hawaii graduate, had been together for years and she had been by his side throughout his career, telling Press Reader:

He’s a hard guy to crack. He’s impossible to even go on a date with. He’s so focused on work and being successful. One day I went into his office and wrote, ‘DINNER WITH BARBEA’ right on his practice board. That’s gotta do it.

The two have also been through their fair share of heartbreak, coming together after Duffy’s sister Chelsea was killed during a road rage incident. Suddenly, the two became parents to Chelsea’s daughter Zeza.

Many thanks to our special team for making our little one's 5th bday so special!! Happy Bday Zeza!(March 9)#GoZeza pic.twitter.com/KqXww1OZJF

When Duffy and Ganot were married, Zeza was a witness.

Need a team to root for during #MarchMadness? Hawaii is coached by @SwatAlum Eran Ganot '03: https://t.co/Df8hRR9WAR pic.twitter.com/o7IFHfXCd8

While Ganot’s coaching resume has been jam-packed over the past few years, his career has not been exclusively on the sidelines. In fact, Ganot was a talented player in his own right.

The Tenafly, New Jersey native was a two-time all-league player and was named to the all-country team as a high school senior. He went on to play three years of college basketball at Swarthmore College in Pennsylvania, serving as the team’s captain for two years. Over the course of his career, Ganot played all five positions and, as a senior, received the Dick Beppler Memorial Award which recognizes outstanding contributions to the men’s basketball team.

Ganot went on to graduate from Swartmore in 2003 with a degree in sociology/anthropology.

5. Ganot Has Focused Much of His Coaching on His Team’s Backcourt

Throughout the course of his coaching career, Ganot has focused much of his efforts on helping to improve his team’s backcourt play.

At St. Mary’s, Ganot worked one-on-one with the Gaels’ guards and helped build an offense that ranked in the top 10 in points per possession and top 15 in rebound margin. He helped hone the skills of now-Cleveland Cavaliers guard Matthew Dellavedova, who went on to become SMC’s all-time leader in scoring, assists, games played, free throw percentage and three-point shots; was named first team all-WCC three times; and was the 2012 WCC Player of the Year.

He is starting to let us play more freely. We have so many threats that can explode at any moment and I feel like he’s understanding that at this point.

That kind of play has led Hawaii to its first NCAA Tournament appearance in 14 years.