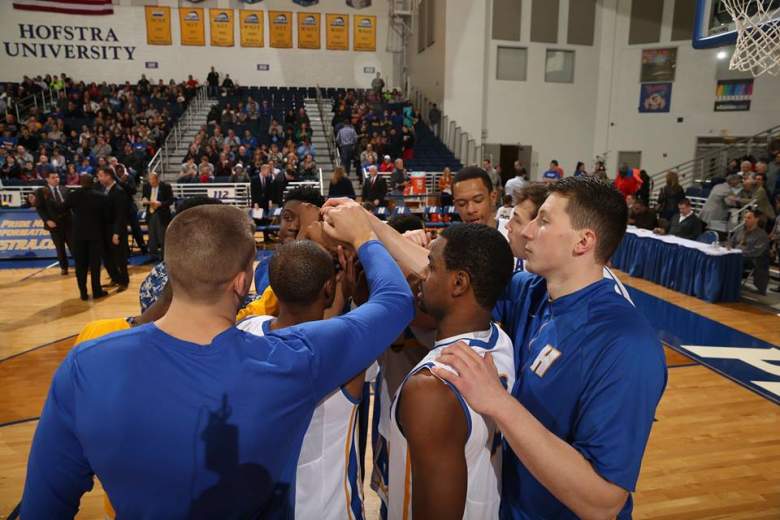 The Hofstra men’s basketball looks to keep its momentum going with a CAA championship tonight. (Facebook)

The Hofstra men’s basketball team has taken just about everyone by surprise this season.

The Pride have been the little team that could and after Sunday’s semifinal victory over William & Mary, Hofstra finds itself in the CAA championship game facing off against UNCW in a battle that will send one team to the NCAA Tournament. The other team will go home.

Talk about some serious postseason drama.

Read on for all the information on tonight’s conference final, including a live stream link if you’re not going to be near a TV at tipoff.

Game Preview: It was only a few short years ago that Hofstra men’s basketball was awful.

It really was. It was bad.

The Pride had seen coaches – including Jay Wright – leave the program faster than they could even hold a welcome-to-the-team party and things looked desperate. So, Jeff Hathaway, Hofstra’s AD at the time, got a cup of coffee.

He met then-Niagara head coach Joe Mihalich for coffee during the 2013 Final Four and offered him a job. Mihalich accepted.

The Pride won 20 games last season and made it to the league semifinals, falling to William & Mary by a single point in double overtime. Hofstra avenged that loss on Sunday.

It’s been a bit of a rollercoaster over the past few weeks. It’s been a rebuilding process, right down to the foundation, but the Pride are, finally, starting to put up walls and windows and maybe even a roof.

Watch out for Juan’ya Green tonight. He plays more than 36 minutes. He decided to come to Hofstra because Mihalich came to coach at Hofstra. Green was named the CAA Player of the Year on Thursday and comes into the final averaging 17.7 points, 4.4 rebounds and seven assists per game.

Green is going to be the spark for the Pride tonight and this team is coming in on fire.