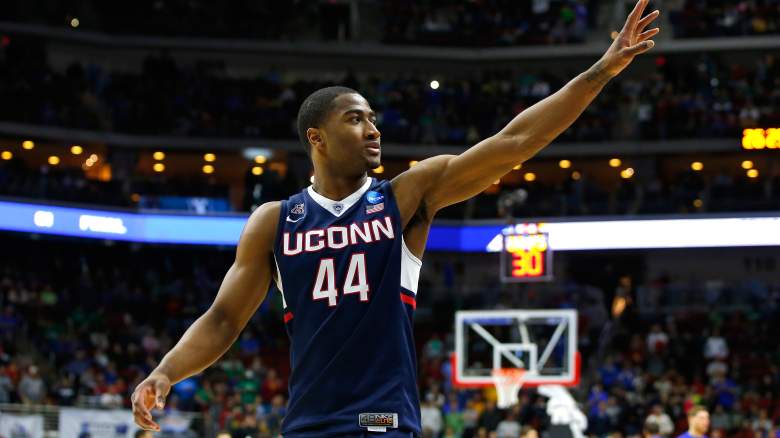 So far, so good for Rodney Purvis and UConn, but things get a bit tougher in the second round. (Getty)

No. 9 seed Connecticut put together an excellent second half to come back against Colorado in the first round of the NCAA tournament on Thursday, grinding out an impressive 74-67 victory.

A matchup against Kansas, the No. 1 team in the country and winner of 15 straight.

Here’s an early look at the battle for a spot in the Sweet 16:

UConn was inconsistent throughout the regular season, but that was also the case in 2014 before the Huskies reeled off six straight wins to capture the national title. This team has proven really difficult to beat come tournament time:

UConn is 24-3 since 2011 in conference and NCAA Tournament games. Team excels in one-and-done pressure games. Barring upset, Kansas up next

The Huskies, who won the AAC tourney and are now 7-0 under Kevin Ollie in the NCAA tournament, play strong defense (10th nationally in Ken Pomeroy’s adjusted efficiency rankings), are lights out from the charity stripe and have the backcourt in Rodney Purvis, Sterling Gibbs and Jalen Adams to give Kansas’ Frank Mason and Devonte’ Graham some problems.

All things considered, Kansas certainly enters as the undoubted favorite. The Jayhawks are one of only two teams in the country to rank in Top-10 in Pomeroy’s offensive and defensive rankings, they can rain it in from long range, they’re deep and they can play a variety of styles. Still, with the way the Huskies are playing, an upset certainly wouldn’t be the most surprising result.

Either way, though, it’s two top-tier programs with lots of talent and great coaching. This one’s going to be good.